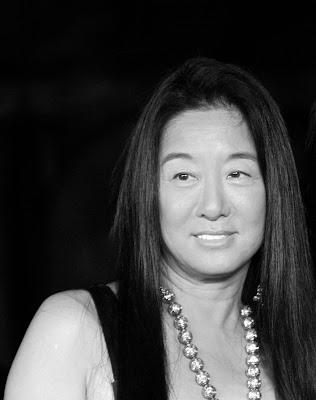 Vera Wang has spent more than twenty-five years in the fashion industry. After her sixteen-year tenure at Vogue, where she was Senior Fashion Editor, Vera Wang served as a design director for Ralph Lauren. In 1990, she ventured out on her own, opening a luxury salon at the esteemed Carlyle Hotel in New York City to showcase her bridal collection. The Vera Wang label quickly took off, earning praise from the fashion elite for its luxurious fabrics, exquisite detailing and modern interpretation of classic lines.

The discipline Vera Wang brings to her work and to her life was developed early by her parents, who encouraged academic excellence and athletic prowess. She studied at Chapin, Sarah Lawrence and at the Sorbonne and competed in international skating competitions.

Years later, her intimate knowledge of the sport, coupled with her taste and design ability, would capture the world's attention when silver medalist Nancy Kerrigan wore Vera's unique design for the 1994 Olympics. Vera Wang remains active in designing at the Olympic level for skaters such as Michelle Kwan.

Vera Wang's fashion sense also came early in life, beginning with visits to the Paris shows with her mother and maturing during her tenure at Vogue. As Senior Fashion Editor, Vera Wang interacted with the world's leading designers and brought their visions and sense of style to the world. Many of these designers became personal friends and mentors and helped Vera Wang deepen her knowledge of the business of fashion. In 1985, Vera Wang left Vogue and joined Ralph Lauren as a design director.

The inspiration for her label stemmed from her own frustrating wedding dress experience. Vera Wang aspired to add fashion sophistication to the segment, which was steeped in tradition and symbolism and yet operated like a commodities business. There was no fashion in bridal until Vera Wang. Today, Vera Wang's position as the preeminent designer of bridal gowns is only one aspect of her fashion vision for the future. The outstanding editorial success of her ready-to-wear shows demonstrates her presence beyond bridal. She continues to challenge herself as a designer, pursuing fragrance, fine jewelry, eyewear, footwear and a home collection that capture her vision for the future. Vera Wang's philosophy remains simple and elegant and her voice clearly distinguished from other designers. She is a design expert that women turn to for advice. Vera Wang is creating a lifestyle that is the epitome of luxury - infinitely sophisticated and always modern.

Her clothes are gorgeous...

I just spent 15 minutes looking at her current lines... weeee...

I absolutely love her wed site. did you watch the bridal runway? It is really really nice! we we..;)

OMG Cate! Did that want me to so have a wedding. I watched it twice. I like the music and the models she choose.Vera is absolutely amazing! The dresses are so simple with clean lines & classy.Ah!