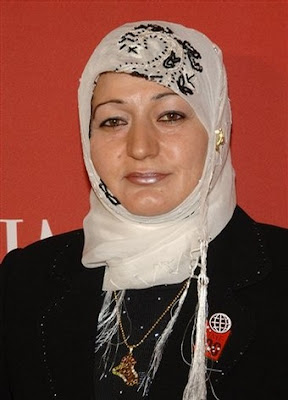 It's not every day that success stories echo out of Iraq into the halls of power, but Madeeha Hasan Odhaib defies the norm. Armed with her sewing machine, unflinching stoicism and determination, Madeeha, 37, is mending the fabric of Iraq.

Four years ago, this mother of two and seamstress turned district council member took three sewing machines, leveraged them into 60 and built a business sewing hospital sheets and flags. She now employs 100 women. That figure may seem insignificant compared with the accomplishments of other achievers on TIME's list. But in a country with more than 60% unemployment and rampant poverty, such efforts provide a lifeline. Each woman Madeeha employs returns home with an invaluable sense of self-respect, money in her purse, food for her children and optimism for a daughter desperately seeking a role model amid mayhem. Madeeha also treads—or, rather, threads—the line between activism and heroism. She has coordinated with the Red Crescent, Red Cross, Hands of Mercy and Iraqi army to distribute food around Baghdad. And despite threats, she says she'll never give up.

Iraq is suffering one of the worst humanitarian crises we have ever seen. While Madeeha rightly makes Time's list, women like her are found throughout Iraq, sewing hope one stitch at a time. Through Madeeha, we celebrate all of Iraq's courageous women, whose resilience and resourcefulness hold the promise of a new dawn.

Boy Cee... what a shing example of living right with the world...

Thanks... and go Madeeha!