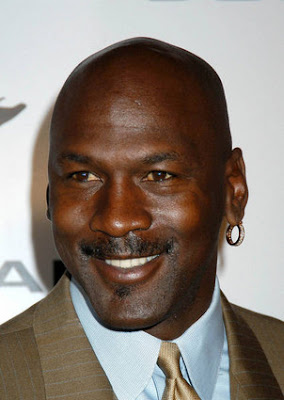 Michael Jordan was born in Brooklyn, New York, on February 17, 1963. His parents, James and Delores Jordan, moved to Wilmington, North Carolina when he was still a toddler. Jordan has two older brothers, one older sister, and one younger sister.

Jordan loved to play baseball when he was a child, and also played some basketball and football. His love for basketball began when his older brother, Larry, continuously beat him in one-on-one pickup games. As with any challenge Jordan faces, this determined Michael to become a better player.

Jordan played basketball for Laney High School in Wilmington, North Carolina. Ironically, Jordan was cut from the varsity team as a sophomore. Instead of giving up after failing to make the team, Jordan used it to spur himself to greater achievements, practicing hour after hour on the court. "Whenever I was working out and got tired and figured I ought to stop, I'd close my eyes and see that list in the locker room without my name on it," Jordan said, "and that usually got me going again." He eventually made the team and led it to the state championship.

Jordan accepted a basketball scholarship from the University of North Carolina. As a freshman, Jordan's ever-growing popularity began when he scored the game-winning basket in the 1982 NCAA championship game against the Georgetown Hoyas. Jordan was selected college player of the year in the 1983-84 season, and led the US Men's Basketball Team to an Olympic Gold Medal in the 1984 Summer Olympics under coach Bobby Knight.

Jordan left college and entered the NBA in 1984, he was selected third in the draft (First pick: Houston--Hakeem Olajuwon; second pick: Portland--Sam Bowie) by the Chicago Bulls, a team that had won only 28 games the previous season. Ironically, Jordan played in his first game as a pro against Washington on Oct. 26, 1984. Jordan became an immediate impact in the league and proved that he belonged among the elite players. He finished his rookie season as one of the top scorers in the league, averaging 28.2 points per game, was named Rookie of the Year, and also made the All-Star team. Jordan led the Bulls into the playoffs in every season, but didn't make the NBA Finals until 1991, where he led the Bulls to their first of three consecutive NBA Championships (1991, 1992, and 1993).

Jordan played in the 1992 summer Olympics with the original Dream Team, perhaps the greatest team ever assembled. It was the first time NBA players were allowed to compete in the Olympics. Michael Jordan averaged 12.7 points per game as the USA Dream Team went 6-0 to win the gold medal, Jordan's second in his career.

...Hey :o)Good post on Jordan. I featured a quote on Jordan not too long along. Love basketball! Detriot Pistons!

I'm not much of a sports fan... but I love when people push beyond their boundaries...

Thanks Cee for reminding me to push beyond mine... : )

Thanks x 2. Cate, everyone has a favorite sports team..um...or sport.;)