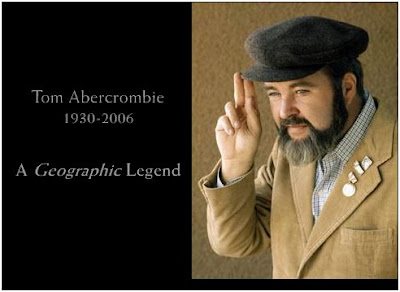 He was invited to work at National Geographic Magazine, where his first report was from Lebanon. He had never been abroad before.

As a staff member of National Geographic magazine, Abercrombie was known for his work in Muslim countries, visited all seven continents, and was one of the first two journalists to reach the South Pole in 1957 (the other was Rolla J. "Bud" Crick of the Oregon Journal). Abercrombie was the first person to win both the Newspaper Photographer of the year (1954) and the magazine photographer of the year (1959). He dived with Jacques Cousteau which he said "was like swimming with a fish".

After 1965 Abercrombie frequently covered Saudi Arabia and he converted to the Muslim faith, taking the name Omar. He was the magazine's expert on the Middle East, and reported from Mecca. He covered the region from Morocco to Afghanistan for more than three decades, until he retired in 1994.

Posted by theceelist at 7:35 AM

Living in the Middle East would be fascinating...

Making friends from another culture... seeing and photographing...