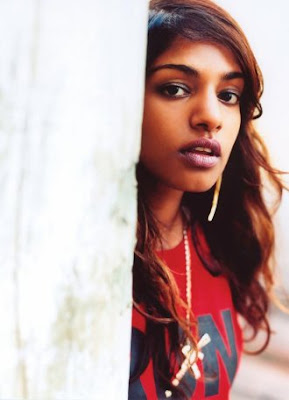 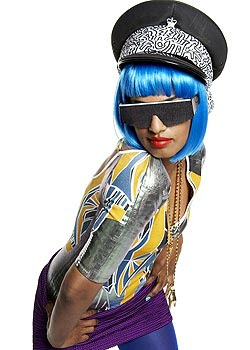 Mathangi "Maya" Arulpragasam, the daughter of a Tamil activist-turned-revolutionary-guerrilla, Arul Pragasam, was born in Hounslow, London. Her alias, "M.I.A." stands for "Missing in Acton". She says her alias references both her London neighborhood (Acton) and her politically tumultuous youth.

While residing in Sri Lanka, Maya lived with her family on her grandparents' remote farm, a collection of huts without electricity or running water. After a year, as her father's involvement in militant activities increased, Maya, her older sister Kali, and their mother moved to Jaffna in the far north of the country.Contact with her father was strictly limited, as he was in hiding from the Sri Lankan Army. Eventually, as the civil war escalated, it became unsafe for the family to stay in Sri Lanka, so they were forced to relocate to Madras, India. By now, the violence of the civil war was at its peak, and the family once again tried to flee the country.

By now, the violence of the civil war was at its peak, and the family once again tried to flee the country. The army regularly shot Tamils seeking to move across border areas and bombed roads and escape routes. After several failed attempts to leave, Maya’s mother successfully made it out with the three children, arriving first in India before finally returning to Maya's birthplace in London, where they were housed as refugees.

Maya was a talented and creative student, eventually winning a place at London's Central Saint Martins College of Art and Design, where she studied fine art, film and video. Here, for the first time, she began to piece together some of the different strands of her life experience. In an early incarnation of what was later to become M.I.A., she learned how to play off her different cultural personae against each other; layering rap iconography with the warfare pictures from her youth, Asian Britain with American new-wave film making style and St. Martin's fashion sense with refugee outlooks.

The nature of M.I.A.'s art work and lyrics has led to increased curiosity into her career and levels of censorship of her work. M.I.A.'s official website has been visited by a curious US Government numerous times, MTV still refuses to play the video of her single "Sunshowers" until references to the PLO are removed from the song, and recently the artist was denied a visa to enter America, despite having previously lived and worked in the country.

M.I.A. ended 2005 embarking on her first North American concert tour, joining Gwen Stefani on her Harajuku Lovers Tour. The arrival of 2006 saw her performing her final arena dates of the tour in Japan, and returning to the studio to work on her upcoming album. At the end of May 2006, Arulpragasam hosted the long running Australian alternative music show Rage as a guest programmer. The show was very well received.

Amazing!
Posted by theceelist at 7:19 AM

Thanks as always Cee for the inspiration... : )