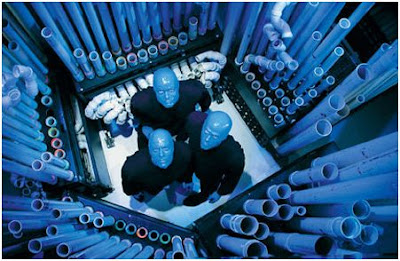 Part rock group, part performance art group, the Blue Man Group launched one of the most successful off-Broadway shows in New York in the early 1990s. The group's show, Tubes, has since expanded to simultaneous runs in Boston, Las Vegas, Los Angeles, and Chicago, as well as its ongoing run at the Astor Place Theater in New York. Although music had always been an integral part of the Blue Man Group's act (in which three people painted blue make art with food and blue paint), the group did not release its first album until 1999. A second album followed in 2003, with more planned under a contract with the Atlantic imprint Lava Records.

The Blue Man Group was conceived and developed by Matt Goldman, Phil Stanton, and Chris Wink. Goldman and Wink, who had been friends since junior high school, met Stanton after graduating from college. Before forming the Blue Man Group, Goldman earned an MBA degree and worked as a software producer. Stanton was an actor and drummer, and Wink made a living summarizing articles for a Japanese magazine and serving food for a catering company.

The three friends all felt they needed a change, and were excited to find kindred spirits in each other. They decided to start a project that would allow them to earn a living while focusing on the things that interested them most. "We were interested in performance art and science," Wink later explained to Los Angeles Times reporter Mimi Avins in an article reprinted in the New Orleans Times-Picayune. For inspiration, the trio turned to everything from Kodo drumming to the Bauhaus absurdist art movement, and from the rock band Pink Floyd to the comedies of Buster Keaton and the Marx Brothers.

The original trio formed in the late 1980s when the three friends, then in their twenties, came together as a guerrilla theater group on the streets of Manhattan. (Guerilla theater is a performance dramatizing a social issue that is enacted outside a traditional theater, often in a park or on the street.) Their first public performance was in New York's Central Park in 1988, when nine members of an informal group that met regularly to discuss social issues staged a street theater event they called a funeral for the 1980s. In the show, the members of the group, all wearing blue paint, threw items representing the 1980s into a coffin, expressing the wish that they would never see them again. The items represented such 1980s icons as Yuppies (young upwardly-mobile professionals), crack cocaine, and postmodern architecture.

Every aspect of the Blue Man Group's performances was carefully orchestrated. The original concept was that the performances would be living paintings. The personalities of the performers disappeared when they put on the blue paint, replaced by something more "profound," as Wink explained to Avins. The group's goal was to challenge their audiences' notions of what constituted art, music, and theater.

The performers soon began to think of themselves as three people playing one character. From the beginning, music was an important part of their act, along with artwork being created on stage in blue paint. The Blue Man character does not speak or express emotion; all is conveyed through art and sound.

Soon the group began to perform in ten- to 20-minute chunks at open mikes around New York City for no money. Gradually they developed a following, and were soon invited to perform an hour of material at the theater space of avant-garde theater company Wooster Theater Group. Finally, they were featured at a performance art festival hosted at Lincoln Center, where they received a three-minute standing ovation. There they were noticed by a producing team who wanted to finance an off-Broadway show featuring the group.

Posted by theceelist at 6:11 AM

The only thing is having to put on blue paint everyday... but I guess to be a "blue man"...