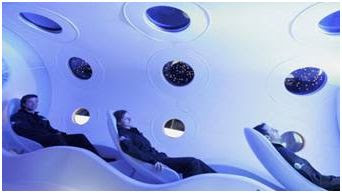 The rocket takes off from Dubai, and cruises across the UAE until it reaches the tip of Oman and as it starts ascending the vista expands to 500 miles across the Middle East.

The cradle of civilisation could form the backdrop to the future of tourism, space tourism, according to astronaut Brian Binnie, as he paints a picture of a potential flight route and the experience, based on his own as test pilot of SpaceShipOne, the prototype to commercial space travel, launched by Virgin Galactic.

“The atmosphere is bristling and electric. You are tense, excited and nervous,” Binnie said. “And those core feelings only grow in intensity as you climb higher and higher into the delirious blue. As the shrill shrieking of the ship’s engine ceases, quiet takes over the rocket and you look out to space — it’s a mystery, it’s majestic, it’s so peaceful, it’s so serene.

Binnie gave the keynote address at the fifth Annual Orion Congress, held at Atlantis, The Palm on Saturday, as industry leaders discussed the future of tourism.

While a spaceport is not currently planned for Dubai, more than 200 tickets, and $40 million worth of deposits, have been bought with Virgin Galactic’s space adventures, based in America.

Posted by theceelist at 6:58 AM

This is the first description of space travel that has piqued my interest...

But the idea of the infinite quiet is very appealling...

This would be exciting! I bet it's very expensive.