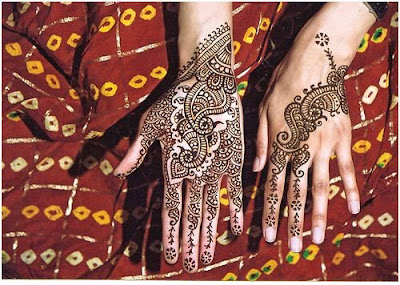 Henna dyes hair, skin, and fabric organically, similar to a black tea dye. Henna is extracted from a tree by drying and grinding leaves and stems. The greenish powder, when mixed with an acidic liquid, makes a temporary red, brown, or orange design on a porous surface. People use henna in ritual skin painting, called Mehndi, for birth and marriage celebrations. Western cultures have adopted henna to make temporary tattoos and organic hair dye.

I really like henna. Remember, henna is to be stored in a cool place, otherwise it looses its potency. Have fun!:)
Posted by theceelist at 7:21 AM

There the son of Pându then observed in the body of the god of gods the whole universe (all) in one, and divided into numerous (divisions).

Then Dhanañgaya filled with amazement, and with hair standing on end, bowed his head before the god, and spoke with joined hands.

[Arguna said:] O god! I see within your body the gods, as also all the groups of various beings; and the lord Brahman seated on (his) lotus seat, and all the sages and celestial snakes.

I see you, who are of countless forms, possessed of many arms, stomachs, mouths, and eyes on all sides.

And, O lord of the universe! O you of all forms!

I do not see your end or middle or beginning.

I see you bearing a coronet and a mace and a discus—a mass of glory, brilliant on all sides, difficult to look at, having on all sides the effulgence of a blazing fire or sun, and indefinable.

You are indestructible, the supreme one to be known.

You are the highest support of this universe.

You are the inexhaustible protector of everlasting piety.

I'm in another dimension much of the time... :)

This was from chapter 11 of the Bhagavad Gita...