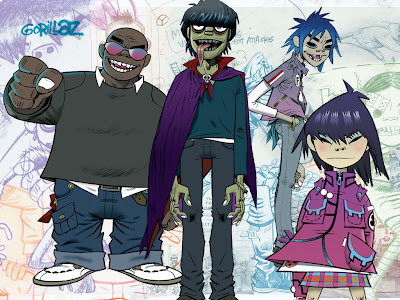 Gorillaz is a virtual band created in 1998 by Damon Albarn of alternative rock band Blur, and Jamie Hewlett, co-creator of the comic book Tank Girl. The band is composed of four animated band members: 2D, Murdoc, Noodle and Russel. The band's music is a collaboration between various musicians with Albarn being the only permanent musical contributor. Their style is broadly alternative rock, but with a large number of other influences including hip hop, electronica, dub and pop.

Gorillaz debuted in late 2000 with the Tomorrow Comes Today EP, which they followed early the next year with the Clint Eastwood single; their self-titled full-length debut arrived in spring 2001. Gorillaz was a massive worldwide success and achieved platinum-level sales in the U.S.sold over seven million copies and earned them an entry in the Guinness Book of World Records as the Most Successful Virtual Band. The group's Svengalis were quick to capitalize, and released the B-sides collection G-Sides, the Phase One: Celebrity Takedown DVD, and the dub-inspired remix album Laika Come Home in 2002. The project went on hiatus as Albarn resumed work with Blur for their seventh album, 2003's Think Tank.

When he was ready to begin the next Gorillaz album, Albarn turned to Danger Mouse, the DJ behind The Grey Album, the infamous mash-up of the Beatles' White Album and Jay-Z's Black Album, and a host of other collaborators, including De La Soul, Shaun Ryder, Debbie Harry, Dennis Hopper, and Martina Topley-Bird. Although Del tha Funkee Homosapien and Nakamura did not return, 2-D, Russel, Murdoc, and Noodle were all present and accounted for on Demon Days, another Top Ten hit, which arrived in spring 2005.

Posted by theceelist at 7:27 AM

A group with unusual style; weird, colourful and crazy fun.