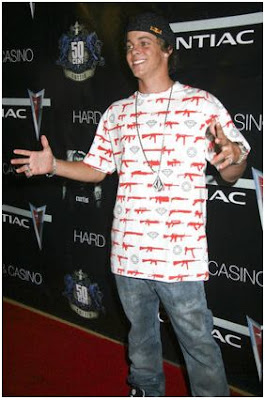 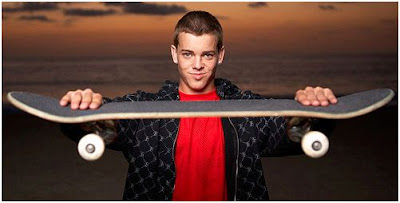 Ryan Allen Sheckler was born dec 30th 1989. he is an American professional skateboarder as well as star and namesake of the MTV reality show, Life of Ryan. He was also featured on MTV`s show "Cribs" when he was 14.

Sheckler was born in San Clemente, California. At the age of 18 months, Sheckler found his dad's old school skateboard. Sheckler taught himself to push it around by using one knee, and eventually stood up on the skateboard. Since the age of 6, he spent up to 22 hours a week practicing tricks in his backyard - which includes a half pipe, table tops and several grind rails. He developed his own trick called the Sheck-lair - an indy kickflip flyout.

He turned professional in 2003 after winning in the X Games, Gravity Games, Vans Triple Crown and Slam City Jam.

Sheckler's career took shape during the summer of 1995, when Sheckler's dad built a new quarter pipe along with a few other additions making it a small skate park. A few years later, he joined the CASL (California Amateur Skateboarding League) and entered one of their contests and won. He idolized Tony Hawk and wanted to invite him to his seventh birthday party. Hawk attended the party and took some time to practice with Sheckler. During 1997-2001 Sheckler was winning the CASL state championships, where he picked up his first eye wear sponsor, Arnette, the same company sponsoring Tony Hawk. In 2004 he was named the World Cup of Skateboarding’s National Street Champion. In 2005, he was named the World Cup of Skateboarding’s National Street Champion and the AST Dew Tour Athlete of the Year. For 2006, he won the Global Assault in Australia and finished fifth at the Tampa Pro in Florida. Sheckler has had roles in the movies Grind, Dishdogz, and MVP 2: Most Vertical Primate, and stars in his own MTV reality show "Life of Ryan". In "Life of Ryan", Sheckler deals with the intense emotional problems that come along with being a rich, famous professional skateboarder.

About The Sheckler Foundation

The Sheckler Foundation was founded as an avenue for Ryan Sheckler, his family, friends and business associates to give back to the community and industry that they are so grateful to. The community is mostly comprised of children and their parents, who as his fans, buy his products, attend his events, and watch his show. The industry is comprised of numerous action sports athletes and companies who have helped Ryan achieve monumental success. It was his ultimate desire to form a foundation that could contribute to many causes that directly benefit and enrich the lives of children. It is also his desire to support and fund programs that help action sports athletes who are injured in their line of work.

Posted by theceelist at 8:34 AM

I skateboarded when little...