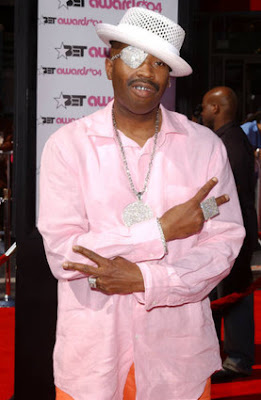 Born Richard Walters to Jamaican parents in South Wimbledon, London, on January 14, 1965, Rick was blinded by a piece of broken glass as an infant. He took to wearing an eye patch from an early age, an accessory that would later serve as part of his image. In the late 1970s at age 14, he emigrated with his family to the Bronx in New York and attended the La Guardia High School of Music and Art. At school, he met and befriended another future rapper, Dana Dane, and the two boys formed the Kangol Crew and began performing at hip-hop parties around their neighborhood. During one performance in 1984, Rick met rap artist Doug E. Fresh, who asked him to play with his Get Fresh Crew (which also included Chill Will and Barry Bee). By 1985, Fresh saw one of the groups songs called "The Show" ascend to number four on the R&B charts, and the single "La-Di-Da-Di" would become a rap classic. Upon the success of their hit singles, MC Ricky D, as Rick was then known, left the Get Fresh Crew in 1987 to sign a solo contract with Def Jam Records, the biggest label in hip-hop at the time.

Instead, The Art of Storytelling resurrected the artist's cinematic tales of X-rated fantasies, as well as his humorous old-school rap technique. In the song "Who Rotten 'Em," Rick returns to ancient Egypt and imagines himself as a rapping slave. The more cohesive record, which also included tightly constructed songs like "2 Way Street," "I Sparkle," and "I Own America Part I" proved that Rick was well on his way to reassuming his former reputation as a talented rap artist. While critics agreed that Rick performed at his best on the solo tracks, the album also featured appearances from fellow rappers and hip-hop artists such as Clark Kent, Large Professor, Q-Tip, Nas, Outkast, and Raekwon.

Well it was obvious the raps unpluggin'
Dignitaries spat wine out they mouth, buggin'
This they never heard that type a tactic
Gold sandles all over their fat steps
One dignitary over what man said
"I'll give you half the eastern border if you sell him"
Back at the rest spot to nap a bit
Mom! Pop! They delighted with the rapper did
"Son", my mom said sweepin' up
"That lunatic'll kill you if you don't keep it up"
What's wrong with you, "Son, I'm not scornin' you
Leave your best for a rainy day, I'm warnin' you"
Ripped my ego apart
So I set upon a mission to change the king heart
'Sire, whippin don't pay off
A lot more done you give a nigger one day off'
He took my advice, 'stead a yell again
Sir noticed that my input was accurate intelligence
That type meant ta stripe, kids
Even after he died, I still write raps like this