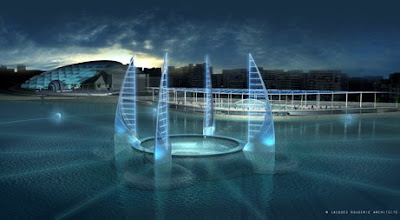 September 16, 2008--A proposed underwater museum (illustrated above) in Alexandria, Egypt, came closer to reality in September 2008, when the UN established a committee to aid the design process with the Egyptian government. (Read full story.)

Fiberglass tunnels would connect aboveground galleries, near the New Library of Alexandria, to the underwater facility, where antiquities would be visible in their natural resting places at the site of Cleopatra's now sunken palace.

Evoking sails of Nile feluccas (photo) and the cardinal directions, the glassy, towering "four points [at center] will be like the [long-gone] Lighthouse of Alexandria that illuminated the [ancient] library and the world," said Jacques Rougerie, lead architect for the feasibility study. "I want to do the same thing with this museum."

—Illustration courtesy Jacques Rougerie
Posted by theceelist at 7:22 AM