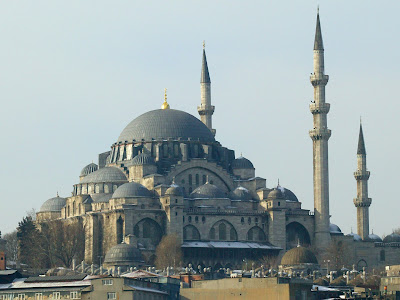 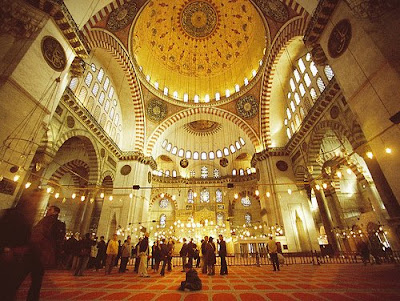 The Suleymaniye Mosque is the largest mosque in Istanbul and was built between 1550-1557 AD by Sultan Suleyman I - "Sulyman the Magnificent". Suleyman was the richest and most powerful Sultan of the Ottoman empire.

This Sultan is remembered by the Turks as the one who introduced laws and not by his magnificent title.

He undertook much construction, rebuilding the walls of Jerusalem (which was part of the Ottoman Empire 1516), and a lot of monuments throughout his empire.

Inside the mosque you will be impressed by its size and also simplicity: tiles from Iznik and colored glass-work brings harmony to a place of prayer and silence.

Four massive solid columns support the mosque: one from Baalbek, another from Alexandria and two from old Byzantine Palaces.

The paintings inside the mosque are dated from the 19th century and were recently renovated.

Spirits contained in a vessel...

Connecting to the great One...

@cate:...I enjoy reading your comments, they're meaningful, thought provoking poetic, and in-depth. It's cool to see more people on the internet who talks with sense, rather than JUST talking...that "concept" becomes draining, annoying and unproductive :)

@Ceelist: Likewise, with your blog...always a joy to read your articles' educational, creative, and in-depth :)
Also, the "puppydreams world" post (in which everyone had a blusttttttt in doing lol) will be every Tuesday, Wednesday and Thursday, if you ever want to join in.