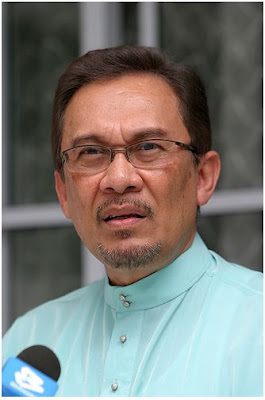 In the sometimes emotional political arena in East Asia, many times a mans fate is linked to what he does or does not do (when it comes to those in power.) Anwar Ibrahim is surely an example of what can happen when a politician goes against the status quo.

Born in 1947 , Anwar attended the University of Malaya when he read Malay studies. Considered a Pro Malay ,he was elected the head of the Youth Malay movement. Arrested and jailed in 2 years for speaking against the establishment, Anwar began a cycle of political outspokenness that resulted in government suppression.

Its ironic in a way as in the early days , Anwar was poised to take over from his then mentor as the Prime Minister. He often referred to their father/son type of relationship but this all came to a grinding halt in 1997, when economic hardship hit the Malays. By this time Anwar was the Finance Minister, and his stringent cuts, that affected Prime Minister Mahathir’s pet projects wasn’t received well at all. In 1998 Newsweek named Anwar as Asian of the year, but in spite of the international accolades for his vigorous restructuring of the Malay economy, Anwar, more and more, was looked at with an eye of distrust by those officials in the government, who were resistant to the changes that Anwar was trying to implement.(The status quo consisted of cronyism and nepotism)

By 1998 Anwar was fighting charges of sodomy. The charges came out of a now debunked book, but the slurs made against Anwar, stuck and in September of that year he was fired from His government position. He was subsequently jailed for six and nine years for corruption and sodomy respectively. During the proceedings, Anwar was clear as to what he believed, this was the reasons for the witch hunt against him. His campaigning for the stop of public funds being used to prop up the Prime Ministers failed businesses. Amnesty International called him a Prisoner of Conscience. In 2004 his conviction was overturned, and Anwar again began speaking out against government corruption. By 2008, Anwar began a bid to rejoin parliament and in spite of government attempts to derail his plans. Anwar successfully was elected a member of parliament again and again in August 2008, allegations of sodomy were levied at him. Again it seems that the threat of true democracy has caused the government to stoop to levels unbefitting a world nation.

Regardless of what happens with Anwar, its clear that his call for reform will not be silenced. It may be that the renewal of Malaysia as a proud nation, may very well go hand in hand with the fate of the wonder. Boy now turned Opposition leader!