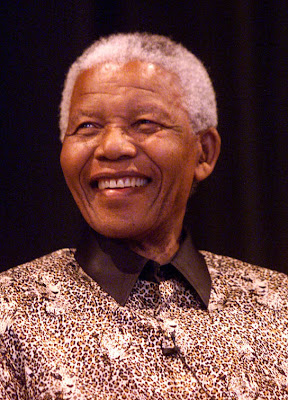 It seems a long time ago when the cries of “Free Nelson Mandela “reverberated around the world. There were concerts and demonstrations. There was worldwide condemnation—and all for the man that is arguably more than just a South African freedom fighter…but a Worldwide statesman.

Rolihlahla Mandela was born in South Africa in 1918. His given name means “Trouble maker”. He was the first member of his family to attend school, and was given the name Nelson by a teacher. He completed school and went on to study for a BA at Fort Hare University. It was there that he met Oliver Tambo, who was to prove to be very important in his future.

After the 1948 victory of the National Party with its policy of apartheid, Nelson increasingly became more active in the resistance movement. Apartheid was a system of institutionalized racism that created segregation between the often poorer blacks and the more affluent colonialists.

Influenced by Ghandi, Nelson initially advocated peaceful protest through his membership in the ANC. But in 1961 he became leader of the ANC’s armed wing, and engaged in guerilla activities. He was deemed a terrorist by the government at that time that prevented him entering the United States until July 2008!

On 5th August 1962, Nelson was arrested after being on the run for 17 months. He was sentenced to life imprisonment.

During his time in jail Nelson studied for another degree and wrote several books. As mounting criticism of the South Africans system of Apartheid mounted, the sitting government wanted to save face and they reversed their ban on the ANC and released Mr. Mandela after 27 years in jail.

Since that point, Nelson worked tirelessly helping others. He negotiated the handover of the two accused Lockerbie bombers between the UK and Libya. He spoke out for Aids awareness after the death of his own son. He was awarded the Nobel Peace Prize with De Klerk (President of South Africa in 1993.

At the age of 85, Nelson retired from the world stage. His health had been in decline and he wanted to be able to spend time with his family. We wish him all the best!