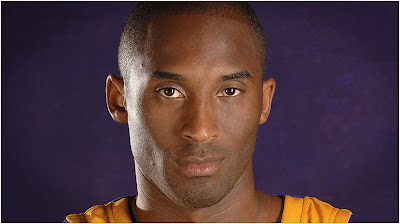 Kobe Bean Bryant was named, surprisingly, after a Japanese beef dish by his father…the only son of Joe “Jellybean’ Bryant who used to play for the Philadelphia 76ers. At the age of six Kobe went with his family to live in Italy, whilst his father coached over there. His experience gave him an additional tongue to his talents. Kobe is a fluent Italian speaker.

His time in Italy led to Kobe’s love for Soccer, which is huge but on his return to the US in 1991,Kobe developed a love for another game,basketball. Kobe gained national recognition for his high school basketball career and it was almost inevitable that Kobe would become one of the youngest draft players for the NBA at the age of 17. He wanted to play for the LA Lakers from the very start, but was actually picked by the Charlotte Hornets.Fortunately, for Kobe this was part of a move that allowed him to be traded to the Lakers.

On his joining the NBA, Kobe wore number 8. He soon began a swift rise as the Lakers new wonder boy, although for the first few seasons he didn’t get a lot of court play. By 1999 things began to change with the arrival of Phil Jackson as head coach. Kobe’s career began to sky rocket along with the addition of Shaquille O Neal. After the success of helping the Lakers win three NBA championships.Kobe’s star began to become a little sullied. There was a much reported beef between himself and Shaquille. There were allegations of rape (He settled out of court.) All in all things were not going well for Kobe at all.

He was married at a very young age to Vanessa Bryant, and has 2 girls as a result. He changed his number 8 shirt for the number 24, which he had wanted in the start of his career. But there still was some hesitancy as relates to Kobe. He was seen as a loner and other players had lost respect for him. That all seemed to change at the 2008 Olympics. Not only did Kobe play for the first time wearing a USA shirt for the "Redeem Team" ,but he also served to redeem his own tattered reputation.

Posted by theceelist at 6:40 AM