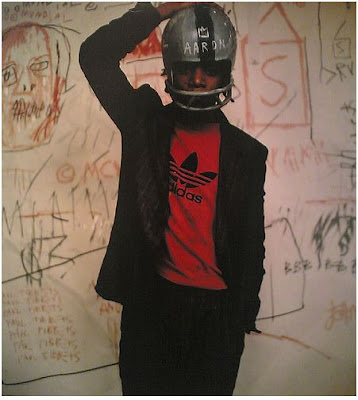 We posted Basquiat for Chic & Swag Friday, but heres a full draft.

Jean- Michel Basquiat’s puertorican mother saw his talent at an early age. She enrolled him as a member of the Brooklyn Museum at the age of 7 years old. Raised with his middle class Haitian father who was unable to give Jean an outlet for his creative urges, clearly he had a troubled childhood and Jean quickly began his creative mark on New York City in a very literal sense. He began daubing the wall of the East Village with his graffiti art.He was a graffiti artist but his art wasn’t like the graffiti of that time. Using the word “Samo” Jean sought to throw a harsh light on the world that he lived in, scrawling phrases that included this word all over the East Village. The end of the era ended with the words, Samo is dead.

At the age of eigh-teen, Jean approached Andy Warhol and sold him a hand drawn postcard for $1. At that time he was considered too young to be able to deal with the pressure and the life of the artists at that time.

Jean first began to gain recognition in 1980 in the Times Square Show. His initial art was drawn on anything that he could get his hands on. He uses crossed out words in order to draw more interest to his art,a very creative way of using words as symbols. As Jean’s talent and celebrity became more known he began to exhibit all over the world. Being able to speak three languages (English, French and Spanish) lead to the international flair of this artist. However it was soon apparent that Jean had fallen to the temptations of drugs, and the heroin habit that would end in his death which became more and more apparent.

Jean had become very good friends with Andy Warhol by this time. Some considered the friendship unbalanced and believed that Andy used the younger Jean for ideas but regardless they were deep friends. Andy’s death in 1987 affected Jean profoundly and some say that was the beginning of the end. Jeans behavior became more and more erratic, his drug used increased and on August 12th 1988 Jean was found dead due to a drug overdose. As is the case with many artists Jeans true talent wasn’t recognized in full until his death. His art can be summed up in the words that are attributed to him. Every single line means something. Indeed it did.

Posted by theceelist at 4:50 AM