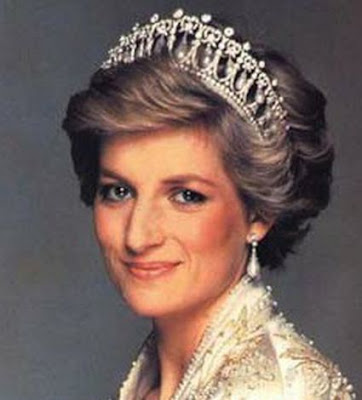 Its hard to understand the love that the British public had towards Diana, Princess of Wales but her premature death in 1997 sealed her image for all time. A formidable woman who served as a mirror to troubled women in the world. A woman who’s own marital and familial problems was news for the public for most of her public life.

Born in 1963, the daughter of the Honorable John Spencer and Frances Spencer…Diana’s early child hood was spent being pulled between her mother and father after their acrimonious divorce. The,now... Earl Spencer married again but all of the Spencer children were united in their dislike of their fathers new wife.

Diana wasn’t the best student at school but she displayed a shyness and poise at a very early age that was to blossom into the woman that she became. Her sweet nature was noticed and she was soon introduced to Prince Charles.

On the 24th of February Diana became officially engaged to the Prince. He was the firstborn son to the Queen of England, thus being first in line to the throne; so her marriage was looked upon as a crowning moment in British modern history. Upon her marriage, she was no longer known as Lady Diana, but Her Royal Highness Princess of Wales. The with that marriage Diana was propelled into the limelight as England’s most popular royal. Her marriage started as idyllic as most new marriages began. Diana was in love with her husband. But he being older had already had relationships and it was difficult for him to connect with the younger Diana(he was 30, she 20) and he soon fell into his old friendships particularly with one Camilla Parker Bowles. Diana was miserable even after the births of her two sons, William and Harry and she threw herself into supporting charities.

Some may say that Diana was very in touch with the mood of the public. Some even said that she was a great manipulator, Whatever the case may be, it is true that in the eyes of the public ..Diana couldn’t put a foot wrong. She was loved even when her marital affairs became news. It was clear that Diana was in a very unhappy marriage. She took the unprecedented step of giving an interview and thus allowed her life to be judged in the court of public opinion. It was clear that Charles was viewed as the villain, and shortly after it was announced that Diana and Charles would divorce.

Diana was now known as Diana Princess of Wales having been striped of her “HRH”, after her divorce, although she was still considered part of the royal household. She threw herself into her charities and boys. She had a couple high profile relationships. The last being with Dodi Fayed who was the son of Mohammad Al Fayed (the much harangued owner of Harrods, London). It was her relationship with Dodi that precipitated her death. Pursued by the paparazzi , driven by a driver that had been drinking, so the events unfolded that led to the death of Diana on the 31st of August 1997.

Diana was love in life and in death. There probably will never be a member of the royal family as maligned as Diana, yet she will always remain the Peoples Princess!

Posted by theceelist at 9:33 AM