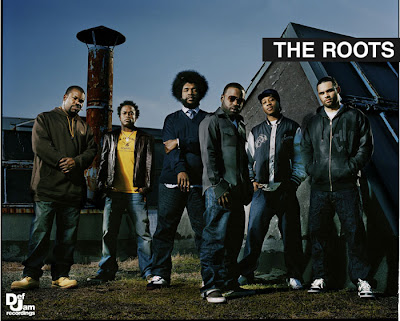 Formed in the heartland of neo-soul, Philadelphia, The Roots , are known for their use of live instruments while creating the sound of hip hop. They have a jazzy/neo-soul edge that makes them stand out.

In 1997 the group was formed by Ahmir and Tariq, who both attended Philadelphia school for the creative arts. They started playing underground, with Ahmir on the drums and Tariq rhyming on top. They began known for their sound on Philadelphia’s South street.

A short time after, two new members joined the group and completed the formation of The Roots.

The group worked hard for a few years but decided to go to London for a year to gain some experience on the ground. They made their first album "Organix" and used the profits to maintain their life in London. After recording their second album Do You Want More???!!, their popularity increased, they acquired a recording contract with Geffen Records, and they returned forthwith to the US with a new energy, and the promise of better things to come.

In their recording career they have had numerous collaborations with artists such as Erykah Badu and they performed with Jay Z on his fade to black tour. Even though the groups members have changed through out the years the groups mission remains the same--to make real hip hop in their own way and style.

After eight studio albums the Roots are still to find the worldwide success, that other hip hop artists have attained.But, they have stayed true to their musical roots.

Rollin down the highway, listening to Sade sing
The way the Smooth Operator move my way
You sitting beside me
Looking like Friday Foster, Pam Grier structure
Look at your body
Keep each other thirsty, kisses like Hershey
But lips is sealed cuz we don't need no controversy
I say I'm in town, you say you want it in the worst way
You probably told your man it was your mother's birthday
Meanwhile it's champagne chillin on ice
You ready for the freakiest things you've done in your life
We break it down like road dogs pulling a heist
You makin sounds like the vibe gotcha reaching your height
Prepare for flight
This is your captain
I'm getting strapped in
There's no denying the strength that it's attraction
Girl working with this you won't be taking a loss
So stop fooling your man and roll
With the one who's breaking you off