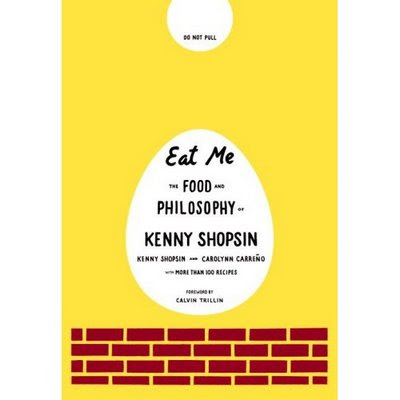 Starred Review. Kenny Shopsin hates publicity the way a magnet must hate metal filings. With a documentary, a New Yorker profile and several New York Times articles clinging to him, this supposedly reluctant restaurateur now adds to his own troubles by releasing a totally hilarious and surprisingly touching treatise on cooking, customer loyalty and family bonds. As his brood grew to include five kids, his Manhattan eatery shrunk in size, yet maintained its idiosyncratic 900-item menu (reproduced here in a 12-page spread). Recipes for more than 100 of the offerings are presented, including Mac n Cheese Pancakes and Blisters on My Sisters (sunny-side-up eggs placed atop tortillas and a rice and bean concoction). But the real treat is Shopsin's salty philosophizing. Sure, pancakes are tasty, but he reminds us that, They are flour and milk drowned in butter and some form of sugar. They're crap. And the customer is always wrong until they show me they are worth cultivating as customers. Two such well-cultivated customers were the writer Calvin Trillin and his wife, Alice. They pop up throughout the book, providing not only happy reminiscences, but a roux of poignancy as both Shopsin and Trillin become widowers, bonded together over the love of a decent meal, quickly rendered.