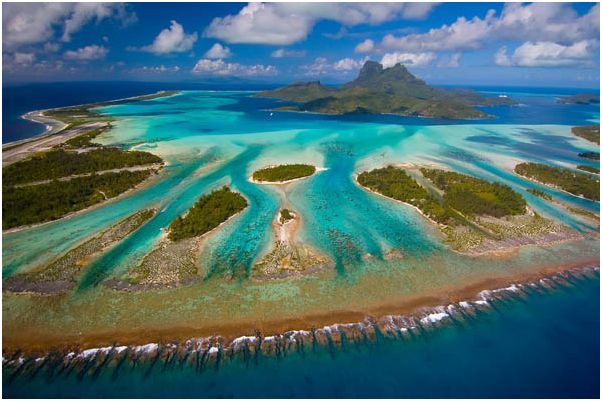 Volcanic remnant wreathed by coral reefs, the island of Bora-Bora rises from the Pacific Ocean. "The lagoon of Bora-Bora, with its incredibly blue water and the stunning backdrop of the island itself, is almost impossible to capture from sea level," notes photographer Bob Krist. "The best way to show the island in relationship to the surrounding water is from the air.

Though aerial photography presents challenges—a constantly moving platform, vibrations from the aircraft, and tricky exposure situations—the results are always worth the effort." 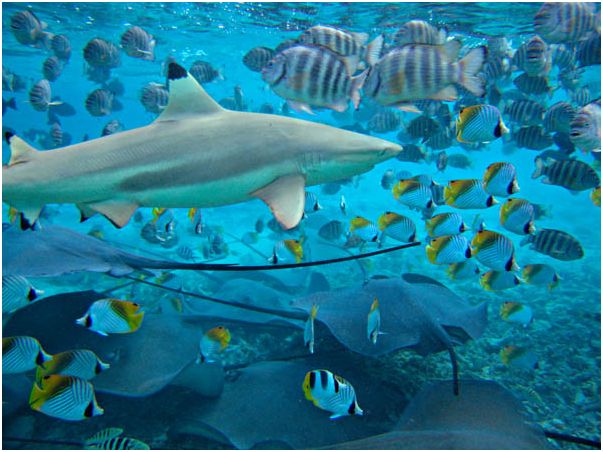 A blacktip reef shark cruises among rays and angelfish in the Bora-Bora lagoon. 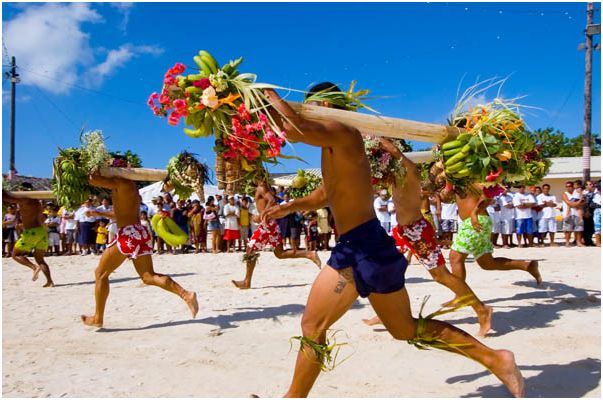 Bearing fruit: Bora-Borans compete in a traditional fruit-carrying race during the annual Heiva celebration. The fruit can weigh upward of 60 pounds, The festival includes Bastille Day festivities on July 14 to commemorate the island's status as a French overseas territory, as well as outrigger-canoe races, fishing competitions, and dance performances.

Under a one hour flight from the island of Tahiti or Moorea, the island of Bora Bora, with a lagoon resembling an artist's palette of blues and greens, is love at first sight.

Romantics from around the world have laid claim to this island where the castle-like Mount Otemanu pierces the sky. Lush tropical slopes and valleys blossom with hibiscus, while palm-covered motu circle the illuminated lagoon like a delicate necklace. Perfect white-sand beaches give way to emerald waters where colored fish animate the coral gardens as they greet the giant manta rays. This could be easily be described as the center of the romantic universe, where luxury resorts and spas dot the island with overwater bungalows, thatchedroof villas, and fabled ambience.

Posted by theceelist at 1:41 PM

Oh Kitty this is actually 1 of my most fav places 2 visit!