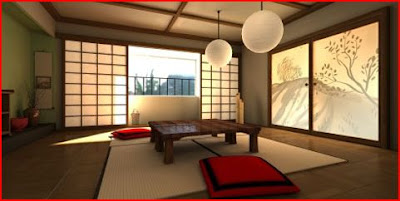 Japanese houses are usually built on three floors, no cellars or basements. They use wooden floors and sliding doors and windows. Japanese homes have very small bathrooms, which are limited to the bath and shower space. Big cities in Japan are very crowded; therefore, Japanese homes rarely have a garden.

The summer season in Japan is quite rainy and humid. So, in order to keep Japanese homes airy and cool, most Japanese houses are built from thin timber walls and have slanted, slightly curved roofs. That is why Japanese home architecture is more likely to suffer from earthquakes and fires. Japanese culture is based on aesthetics and the natural environment. Its ideas of balance, harmony, economy and beauty are projected in Japanese art and architecture, for example: traditional Japanese houses, the art of flower arrangement, brush painting and the famous Japanese tea ceremony.

When I was little my father refused to have furniture we always used through pillows. He says he doesn't like how couches make the house feel cluttered. Then again, I do come from a large family..LOl:) Go figure..LOL .. yeah dad I know what u trying 2 say.. just jking guys..LOL I have a WONDERFUL dad:) XO

Posted by theceelist at 6:20 AM

I would love to live in a Japanese house... Cee...

I love sleeping on a futon.