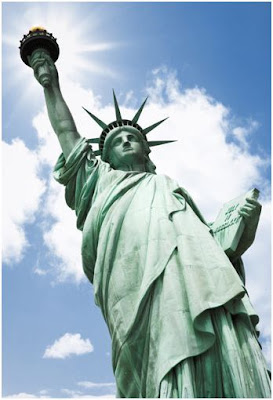 The Statue of Liberty National Monument officially celebrated her 100th birthday on October 28, 1986. The people of France gave the Statue to the people of the United States over one hundred years ago in recognition of the friendship established during the American Revolution. Over the years, the Statue of Liberty's symbolism has grown to include freedom and democracy as well as this international friendship.

& guys, when u go 2 NYC b sure 2 ride..
more info...
http://gonyc.about.com/cs/attractions/p/statenislandf.htm
http://www.statueofliberty.org/Statue_History.html
Posted by theceelist at 6:05 AM

The ferry is great Cee...

I sailed around the statue too... that was a trip... we also sailed up close to the ferry... I was taking lessons and the teacher was drunk!