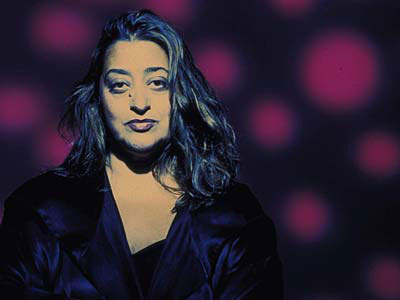 In the past decade, there has been a turbulent for architecture and design in Britain. With supported by the crown Prince of United Kingdom, Prince Charles, architecture has been in the front line of public debate. There are a lot af school of architecture that being developed and also a lot of creative and talented young architects that being born in United Kingdom. Among a lot of young architects that bring avant-garde way of thinking through their work, Zaha Hadid appear as one of those avant-garde thinker in doing design,especially architecture and some other design fields. Among male domination, there are not so many female architect has become so intens in doing their works and projects like what has being done by Zaha Hadid.
In 1977, Rem Koolhaas has reported that Zaha Hadid fifth year at the Architecture Association included that she was a rocket that took off slowly to describe a constantly accelerating trajectory ( Koolhas in Fawcett, 1991 ). Zaha Hadid was born in Baghdad in 1950 from a rich family.

In 1968 – 1971, she was taking maths at the American University of Beirut and continued her study at Architectural Association School ( AA School ) in London, United Kingdom in year 1972 – 1977. After completing her architectural studies, Zaha Hadid join the OMA - Koolhas ( the Office of Metropolitan Architecture ) and collaborating with her senior, Rem Koolhaas, Zaha began her own career. Became a London - based architectural designer whose work encompasses all fields of design, ranging from urban scale through the micro-space design, such as products, furniture, and interiors. Her concern was a simultaneous work of teaching, researching, and practicing, without any compromising to the modernising. From the beginning of her career, Hadid has reworked the concept of how to organize the public space. Hadid has a deep concern through art. It is probably because she likes to paint. Hadid’s work has attracted Philip Johnson who made it as the focal point of “Deconstructionist” exhibition that took place in Museum of Modern Art in New York. Now, her suprematist theme has been realised in myriad excisting projects, such as her first built schemes in Japan, called Folly 3 ( 1990 ) in Osaka for the Garden Festival and MoonSoon, a spectacular restaurant interior in Sapporo, North Island. Since winning the prestigeous Pritzker Prize for Architecture in 2004, work has been pouring for this Iraq born-London based architect.

Through her recent architectural and installation art project in Singapore, Hadid has shown her deep concern about how art and space should make collaboration in order to speak up about good metaphor.We can see that along the decades, she the leading woman architect who has innovation and creativity in her work.

I think Zaha's work is trippy and organic... way out there...

Seeing her stuff makes me think how dry my imagination is... gotta let the cosmic stuff in more...

Thanks for sharing all the great people...

Also the asiatransmaterial site is cool.