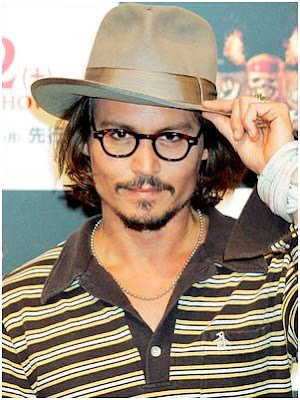 Actor, director, musician. Born John Christopher Depp II in Owensboro, Kentucky, on June 9, 1963. Raised in Florida, Depp dropped out of school at age 17 in hopes of becoming a rock musician. He fronted a series of garage bands, including The Kids, which was once opened for Iggy Pop.

Depp got into acting after a visit to LA with his former wife, who introduced him to actor Nicolas Cage. He made his film debut in 1984's A Nightmare on Elm Street. In 1987, he leapt into stardom when he replaced Jeff Yagher in the role of undercover cop Tommy Hanson in the popular Canadian-filmed TV series 21 Jump Street. In 1990, after numerous roles in teen films, Depp received an opportunity to exhibit his exhausting versatility in the title role of Tim Burton's fantasy Edward Scissorhands.

Following the film's success, Depp carved a niche for himself as a serious, somewhat dark, idiosyncratic performer, consistently selecting roles that surprise critics and audiences alike. He continued to gain critical acclaim and increasing popularity for his work, most notably in 1993's Benny & Joon and in the title role of What's Eating Gilbert Grape in 1993, which cast him as a young man dissatisfied with the confines of his small-town life. In 1994, he re-teamed with Burton in the lead role of Ed Wood.

In 1997, he played the undercover FBI agent in Mike Newell's Donnie Brasco. After a starring turn as Hunter S. Thompson's alter ego in Terry Gilliam's adaptation of Fear and Loathing in Las Vegas in 1998, Depp tried his hand at sci-fi horror with The Astronaut's Wife in 1999. The same year, he teamed up with Burton once again on Sleepy Hollow, starring as a prim, driven Ichabod Crane. He appeared the following year in the small but popular romantic drama Chocolat, followed by a big-budget role as real-life cocaine kingpin George Jung in Blow in 2001. He starred in the terror drama From Hell in 2001 and Robert Rodriguez's Once Upon a Time in Mexico in 2002. In 2004, the actor earned an Academy Award nomination for his starring role in the family adventure Pirates of the Caribbean. At the end of that year, he turned in a critically acclaimed performance in Finding Neverland, in which he starred as Peter Pan creator J.M. Barrie. In 2006, he returned as Captain Jack Sparrow for the sequel Pirates of the Caribbean: Dead Man's Chest, which broke a box office record in reaching the highest weekend tally ever.

The third installment fared well too. Pirates of the Caribbean: At World's End (2007) was released on Memorial Day weekend, bringing in $138.8 million. Saying goodbye to Captain Jack, Depp took on one of theater's most notorious characters in Sweeney Todd: The Demon Barber of Fleet Street that same year. Directed by Tim Burton and co-starring Helena Bonham Carter, the dark and gory musical tells the tale of a barber kills some of his customers who then turned into pies made by his downstairs neighbor. Depp netted a Golden Globe Award for his work on the film.

Off-screen, Depp has gained notoriety for his romantic involvements with several female celebrities, including broken engagements to Jennifer Gray, Winona Ryder and Kate Moss. He was married to Lori Anderson from 1983-1985. Depp has fathered two children with French singer/actress Vanessa Paradis; Lily-Rose Melody born in 1999 and Jack born in 2002.

Posted by theceelist at 8:05 AM

He sure is a good actor..."serious, somewhat dark, idiosyncratic performer, consistently selecting roles that surprise critics and audiences alike..."

I want to see Sweeney Todd...

Yea Cate! I saw Sweeney Todd in the summer & it's a really good movie...so be sure to watch it..:)

Cee... I heard in the summer that it was a really gory movie so I didn't go... but after reading about Mr. Depp now I want to see it...

It's funny you say this... because I was going to tell you, if you're not felling well, maybe you shouldn't watch it right now.