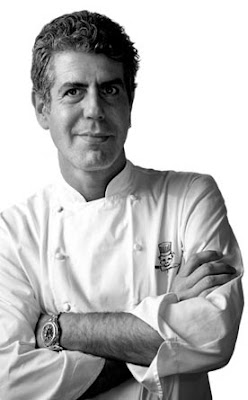 Anthony Bourdain, executive chef of Brasserie Les Halles in New York City, is the anti-celebrity chef. He’s crass, offensive, and doesn’t wear starched, white jackets or fancy hats. He is, however, a great cook, a great writer, and has an infectious passion for food of every kind. His passion and adventurous spirit are what have created millions of gourmet fans around the world. Chef Bourdain may have turned more people onto good food than any five-star, fancy-hat chef out there. Anthony Bourdain was born in New York in 1956. After high school, he spent two unproductive years at Vassar College before attending the Culinary Institute of America in Hyde Park, New York. Following graduation from the C.I.A., Bourdain was the chef at New York City’s Supper Club, One Fifth Avenue, and Sullivan’s before coming to Les Halles.

Bourdain has written several books including the crime thrillers Bone in the Throat (1995), Gone Bamboo (1997), the Bobby Gold Stories (2002), and the nonfiction work Typhoid Mary: An Urban Historical (2001). Chef Bourdain came to many people’s attention with his exposé of New York restaurants, “Don’t Eat Before Reading This”, published in the New Yorker (1999). He expanded this behind-the-scenes look at the not so glamorous world of restaurants and his own personal history with the hugely successful bestseller, Kitchen Confidential (2000).

The success of Kitchen Confidential led to a Food Network television series, A Cook’s Tour. Chef Bourdain travels around more than a dozen countries in a search for the perfect meal. Some of his most memorable episodes include dining with gangsters in Russia, swallowing the still-beating heart of a cobra, and revisiting the tiny fishing village of La Teste, France where he experienced his first raw oyster as a boy.

Anthony Bourdain remains the executive chef of Les Halles, which has expanded to five restaurants, including locations in Washington, D.C. and Miami. Chef Bourdain is also capitalizing on the success of A Cook’s Tour with a new traveling culinary program, Anthony Bourdain: No Reservations, on the Travel Channel (2005).

I remember One Fifth... it was a beautiful restaurant... 1 Fifth Avenue...NYC...

Yea Cate! Bourdain he's speak his mind. His show is cool & interesting.Be sure to check it out..:)