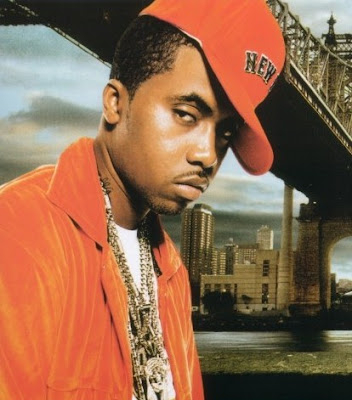 Nasir Bin Olu Dara born September 14, 1973 in Brooklyn, New York. His family later moved to the Queensbridge projects. As a kid, Nas wanted to be an instrumentalist. He often played his dad's (jazz/blues musician Olu Dara) trumpet. Nas was also into comics. But, he immersed himself into the hip-hop culture shortly after his parents Olu Dara and Ann Jones separated. That was when young Nasir Jones began to write short stories and poetry.

Nas made his hip-hop debut on "Halftime," which was featured on MC Serch's soundtrack to "Zebrahead." In mid 1992, MC Serch helped secure Nas a deal with Columbia Records. The initial concern was that Columbia, a major label, would dilute Nas' raw rap style. In 1994, Illmatic was released. The album, which featured production by DJ Premier, Large Professor, Pete Rock, and Q-Tip, and a relatively unknown emcee named AZ, was lauded as a masterpiec.

Following the competitive nature of east coast rap, one of Brooklyn's most prolific rhymeslingers, Jay-Z, found himself in a war-on-wax with Nas -- Queensbridge #1 draft. Although, many later claimed that Nas won the battle with "Ether," his esoteric, yet wittily ferocious response to Jay-Z's "Takeover," both rappers claimed victory in their most recent BET interview.

In 2008, Nas released his 2nd Def Jam album, Untitled. After drawing fire for the confrontational title, Nas bowed to pressure and decided to release the album without a title. Well, not exactly. You see, at the back of Nas' mind this is still his N*gger album, intact with the same songs and concepts. It's a testament to the MC's bravery that he lives to tell about every provocative moment of this album's journey.

On one of the decade's most anticipated hip-hop albums, Nas bares his soul like he's never done before. From the moving intro, "Queens Get The Money" to the dashing closer, "Black President," this is Nas at his most honest, radical, and glaringly optimistic.

Get past the bragfest and Untitled switches into full-blown political commentary mode. It's like Nas is saying, "That's the n*gger. Now here's the n*gga."

Supporting that point, an assault of staccato blasts leaps out of "America," as Nas transforms into a Rocky-like figure ready to tackle any obstacles. At its political core, Untitled is Nas' celebration of what he deems his life mission: hip-hop hero. The MC who declares the culture dead so he can resurrect it on an album called Hip-Hop Is Dead. "People are afraid of criticism, but I always put myself in sacrificial positions," he rhymes on "N.I.G.G.E.R. (The Slave & The Master)"

Posted by theceelist at 4:05 AM

I never knew that I would love rap...