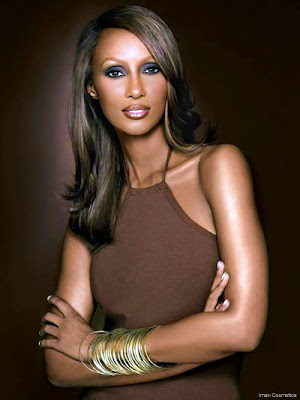 Iman Abdulmajid was born in Mogadishu, Somalia on July 25, 1955. Being the daughter of a diplomat, Iman was raised in a comparatively privileged home, where she was quickly taught the basics of global politics.

That interest not only stayed with her for the rest of her life, but it led her to Nairobi, Kenya to study Political Science at the local University. It was there that she crossed paths with fashion
photographer, Peter Beard. Instantly entranced by her strong features, beautiful eyes, and model figure, Beard begged her to come to New York. After some initial skepticism, Iman crossed the Atlantic and made an instant impact on the global fashion scene.

In 1979, Iman made history as the first African (or African-American) woman to appear on the cover of Vogue. Soon afterwards she made more history when she became the first woman of color to sign a cosmetics contract. She became as big a star as a model could become in that era, and quickly turned her attention to film.

After some small roles in some truly terrible films, Iman got her breakthrough in the Oscar-winning Out of Africa with Robert Redford and Meryl Streep. From there she moved on to roles in films like House Party 2, Star Trek VI: The Undiscovered Country, and a cameo in the Michael Jackson "Remember the Time" video.

Having grown weary of promoting cosmetics, Iman decided that the major brands were not doing enough to address the needs of women of color. In 1994, she launched her own line of cosmetics aimed exclusively at this often overlooked and underrepresented consumer group. So far, the company has been extremely successful and in 2000 the company launched the I-IMAN Makeup line of cosmetics for use by all women.

A successful modeling stint, a respectable acting resume and a successful business gave Iman almost every accomplishment she could have wanted in her professional career. But she still felt alone after her divorce to Spencer Haywood, the father of her daughter Zulekha, in the mid-1980s. By the time the 1990s had rolled around, she had found herself a soul mate in the form of music royalty.

Legendary artist David Bowie fell head over heels for the model after she finally accepted his backstage pass to a 1990 show in Los Angeles. Two years later the two were married, and have remained together ever since. In 2000, the power couple gave birth to their first child together, Alexandria Zahra.

Far from keeping her success and her talents exclusively to herself, Iman has worked hard to make sure that she can use her celebrity to help the underprivileged. As an active member of Mother's Voices, Action Against Hunger, The Children's Defense Fund, and the All Children Foundation, Iman has entrenched herself as one of the most socially conscious women in the celebrity world.

Iman is certainly one of the most beautiful women on Earth, but by conquering such diverse challenges as modeling, acting, raising a family, and fighting for a better world, she has made herself one of the most respected too.

I'm givin thanks for Iman...

Bands of love floating around...

Did you get 808 Heartbreak yet?

I wish this song would come true...

Please say you will for real..."