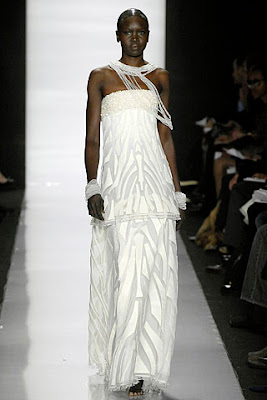 Alek Wek – it is pronounced Uh Lek – was born into the southern Sudanese Dinka tribe in 1977. Named "the-black-and-white-cow" after a tribal good luck symbol, she was raised in a large but close-knit family in the small village of Wau.

Along with millions of other Sudanese, her life was turned upside down by the outbreak of civil war in 1982. After their house came under fire from an unknown group, the Wek family fled. When they returned a month later, they found the village ravaged and its inhabitants living in the local school, without amenities or food.

Eventually, Alek was sent to the capital, Khartoum, where she was joined three months later by the rest of the family. Here, her father, an education administrator, underwent a hip replacement procedure, but as a result of complications following the operation, he died. Shortly afterwards the Weks decided to leave their homeland.

Alek's older sister had moved to Britain before the civil war, and applied on behalf of her family for refugee status. In 1991 Alek and her younger sister were accepted, but it was two years before they were joined by their mother and two more of their nine siblings. The remaining family members were finally given refuge by Australia and Canada.

While living with her sister in England, Alek supported herself with odd jobs outside school hours and sent money back to her mother. She learnt English quickly, and went on to study fashion technology and business at the prestigious London College of Fashion.

The African beauty's big break came in 1995 when she was discovered by a model agency scout while shopping in a London market. She signed to Models One, and it wasn't long before she appeared in a Tina Turner video and on the pages of cutting edge publications Vibe and i-D.

One of the hottest new faces on the scene, she was soon courted by top design houses for their runway shows. Her distinctive looks, so different from the usual catwalk fare, caused a stir in the world of fashion, and garnered a raft of awards, including "Best New Model" at the Venus de la Mode Fashion Awards, 1997 MTV model of the year, and "Model of the Decade" from i-D.

Alek's success has redefined the traditional understanding of beauty, as US chat show host and actress Oprah Winfrey underlined in an interview with the model. "If you had been there when I was growing up, I would have thought of myself as beautiful," the presenter confessed.

Outside her modelling commitments, Alek draws upon her own experiences as a refugee to help highlight the plight of the world's dispossessed and, as a member of the US Committee For Refugees' Advisory Council, campaigns to raise the profile of the humanitarian disaster in the Sudan.

Woman of Intergity, Confidence, & Pure Beauty...from the inside out :O)

Thanks for sharing Cee :O)

Thanks for sharing her...

The blacker the berry the sweeter the juice? lol :)

The blacker the berry the sweeter the juice

I say the darker the flesh then the deeper the roots...