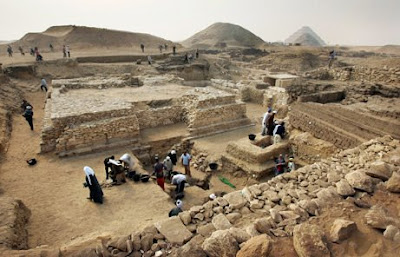 4,300-Year-Old Queen's Tomb Found in Egypt after centuries under sand, the remains of the pyramid of Queen Sesheshet (center left) has been excavated at the ancient Egyptian royal burial complex Saqqara, archaeologists announced November 11, 2008.

At its prime, the pyramid stood nearly five stories tall.

It difficult to imagine being loved or venerated so much that people build you a five story tomb...

lol seriously lol..I agree Cate. love must have been valued on a diff level than today.I don't know...unless the giants enjoyed building...lol