12-Year-Old’s a Food Critic, and the Chef Loves It 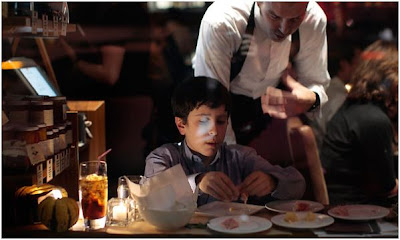 David Fishman, on a subsequent visit to the Salumeria Rosi, trying the offerings at the restaurant on the Upper West Side. “Good variety,” he wrote.

Everyone’s a critic, and apparently it’s never too soon to start.

That’s why David Fishman, an Upper West Sider who turned 12 last month, decided to take himself out for dinner one night last week. His parents had called him at home to say they were running late, suggesting that he grab some takeout at the usual hummus place.

Hummus, again? David thought he could do better than that.

He had recently passed by the newly opened Salumeria Rosi, a few blocks from his home, and had been intrigued by the reflective black back wall, the cuts of dried pork hanging from the ceiling, the little jars of cured olives and artichokes adorning the walls. If it was O.K. with his mom (and it turned out it was), he wanted to try that instead. David aspires to be a food critic — he has some vague notion that he could make a living writing for the Zagat guides — and the new Italian spot on Amsterdam Avenue near 73rd Street seemed worthy of investigation.

Be sure to read the rest..:) LOL just type child food critic...:)
www.nytimes.com
Posted by theceelist at 7:43 AM

I read this article in the NYT and loved it... 12 years old with a discerning palate... right on...