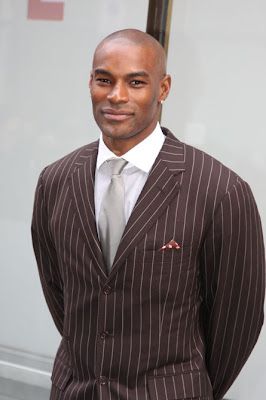 Tyson Beckford has come a long way from New York's Bronx to become a cover boy and the face of Ralph Lauren. In doing so he has paved the way for up-and-coming models of colour.

So how does he handle success? "I thank God every day," he says. "That's all I can do. That, and try to help all those other guys who are trying to do what I did."

Born Tyson Craig Beckford on December 19, 1971, in New York, the catwalk star had no plans to be a model as he grew up in Jamaica and the Big Apple. In fact, his exotic eyes and high cheekbones – a fascinating combination resulting from his Jamaican-Panamanian-Chinese heritage – drew ridicule from his schoolmates.

The man who would become one of People magazine's Most Beautiful People was barely out of his teens when his striking looks caught the eye of the editor of hip hop magazine The Source in 1991. Within two years the 6ft 2in hunk had a starring role in Ralph Lauren's Polo Sport fragrance campaign.

Before long, Tyson – who sports at least eight tattoos on his chiselled bod – was featured on the covers of dozens of magazines, had posed for top photgraphers

Herb Ritts and Bruce Weber, and was as named VH1's 1995 Model Of The Year. He was also praised by style icons such as Ralph Lauren who cited his "all-American look with a dramatic edge", saying: "He conveys power, style and intelligence in a very exciting way."

However, as a forerunner in his field, Tyson's path hasn't always been smooth. He once turned down a spot on the coveted Milan Fashion Week catwalk because he was the only black man invited to the event. "There are so many African-American and African men who are trying to get jobs, and they weren't giving the jobs to them," he said at the time. "I'm not the only brother out here trying to make it. So I didn't go."

But the father-of-one – his son, Jordan, was born in 1998 – soon set his sights beyond fashion stardom. Having shown off his screen presence in music videos, including Toni Braxton's Unbreak My Heart and Britney Spears' Toxic, Tyson also has his gorgeous brown eyes on the big screen.

After an appearance in the little-seen Boricua's Bond and a comic turn as himself in the Ben Stiller male model spoof Zoolander, he took on higher-profile roles, including a part in Biker Boyz alongside The Matrix star Laurence Fishburne.

hasn't been easy, however, for the handsome star who says his good looks are sometimes more of a hindrance than a help. "A bad day for me now is going on an audition and not getting the gig," he says. "I've got to prove myself because (casting directors) think I am a pretty boy who can't speak.

Tyson is gorgeous and honest...