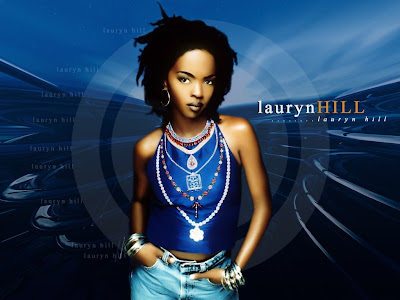 Call Lauryn Hill the mother of hip-hop invention; with her 1998 solo debut The Miseducation of Lauryn Hill, the Fugees' most vocal member not only established herself as creative force on her own, but also broke new ground by successfully integrating rap, soul, reggae, and R&B into her own sound.

Raised in South Orange, NJ, Hill spent her youth listening her parents' multi-genre, multi-generational record collection. She began singing at an early age, and was soon snagging minor roles on television (As the World Turns) and in film (Sister Act II: Back in the Habit). Her on-again, off-again stint in the Fugees began at the age of 13, but was often interrupted by both the acting gigs and her enrollment at Columbia University. After developing a following in the tri-state area, the group's first release -- the much-hyped but uneven Blunted on Reality -- bombed, almost causing a breakup. But with the multi-platinum The Score, the Fugees (and especially the camera-friendly Hill) achieved international success, though some pundits took shots at their penchant for cover songs.

That criticism made Miseducation even more of a surprise. Hill wrote, arranged, or produced just about every track on the album, which is steeped in her old-school background, both musically (the Motown-esque singalong of "Doo Wop (That Thing)") and lyrically (the nostalgic "Every Ghetto, Every City"). As Miseducation began a long reign on the charts through most of the fall and winter of 1998 -- initially thanks to heavy buzz and overwhelming radio support for "Doo Wop (That Thing)" -- Hill became a national media icon, as magazines ranging from Time to Esquire to Teen People vied to put her on the cover. By the end of the year, as the album topped virtually every major music critic's best-of list, she was being credited for helping fully assimilate hip-hop into mainstream music. (Such an analysis, however, is lightweight at best: Hip-hop had been a huge force on the sales and radio fronts for most of the decade, and rappers Jay-Z, DMX, and Outkast had dropped similarly lauded LPs prior to or just after Miseducation's release, adding to the genre's dominant sales for the year). The momentum finally culminated at the February 1999 Grammy awards, during which Hill took home five trophies from her 11 nominations, including Album of the Year, Best New Artist, Best Female R&B Vocal Performance, Best R&B Song, and Best R&B Album; the most ever for a woman. Shortly after, she launched a highly praised national tour with Atlanta rappers Outkast.

Hill also faced a lawsuit from two musicians who claim they were denied full credit for their work on the album. In an interesting twist, Hill's album proved to be such a commercial and critical success that it shed doubt on the Fugees' future. Their in-fighting became common knowledge, and matters were complicated when many fans interpreted Miseducation's various anti-stardom rants as a public dissing of co-Fugee Wyclef Jean.

She did continue shaping her solo career. The double-disc MTV Unplugged No. 2.0 appeared in spring 2002, showcasing a deeply personal performance from Hill. Brian Raftery, All Music Guide

starpulse
Posted by theceelist at 7:52 AM

I am & will always be MUCh inspired by Lauyrn Hill. MTV: Unplugged was a seriously compealing & uplifting album.

I LOVE how she dugged deep into the industry, while at the same time, exposing her views of LIFE back then, & leading up to her decisions of the present.

I WISH she was coming out with something new, I truely, but if not, that CD is always on the CD player playing up a storm of inspiration! My favorite track is #13.

Thanks for sharing! :O)
Peace.