More history for you guys! Dope! 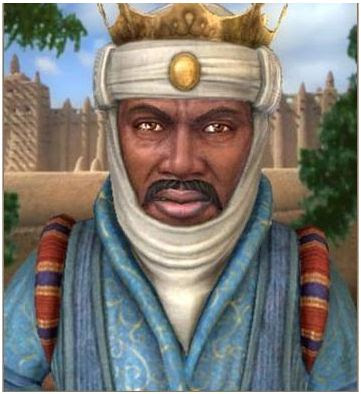 In 1312 Mansa Moussa, the most legendary of the Malian kings, came to the throne. Mansa Moussa was a devout Muslim who built magnificent mosques throughout his empire in order to spread the influences of Islam. During his reign, Timbuktu became one of the major cultural centers of not only Africa but of the entire Islamic world.

When Mansa Moussa came to power, the Mali Empire already had firm control of the trade routes to the southern lands of gold and the northern lands of salt. Under Moussa's reign, the gold-salt trade across the Sahara came to focus ever more closely on Timbuktu. The city's wealth, like that of many towns involved in the trans-Saharan trade route, was based largely on the trade of gold, salt, ivory, kola nuts, and slaves.

Mansa Moussa expanded Mali's influence across Africa by bringing more lands under the empire's control, including the city of Timbuktu, and by enclosing a large portion of the western Sudan within a single system of trade and law. This was a huge political feat that made Moussa one of the greatest statesmen in the history of Africa. Under Moussa's patronage, the city of Timbuktu grew in wealth and prestige, and became a meeting place of the finest poets, scholars, and artists of Africa and the Middle East.

Mansa Moussa brought the Mali Empire to the attention of the rest of the Muslim world with his famous pilgrimage to Mecca in 1324. He arrived in Cairo at the head of a huge caravan, which included 60,000 people and 80 camels carrying more than two tons of gold to be distributed among the poor. Of the 12,000 servants who accompanied the caravan, 500 carried staffs of pure gold. Moussa spent lavishly in Egypt, giving away so many gold gifts—and making gold so plentiful—that its value fell in Cairo and did not recover for a number of years!

In Cairo, the Sultan of Egypt received Moussa with great respect, as a fellow Muslim. The splendor of his caravan caused a sensation and brought Mansa Moussa and the Mali Empire fame throughout the Arab world. Mali had become so famous by the fourteenth century that it began to draw the attention of European mapmakers. In one map, produced in 1375, Moussa is shown seated on a throne in the center of West Africa, holding a nugget of gold in his right hand.

After visiting the holy cities of Mecca and Medina on his pilgrimage, Moussa set out to build great mosques, vast libraries, and madrasas (Islamic universities) throughout his kingdom. Many Arab scholars, including the poet and architect, Abu-Ishaq Ibrahim-es-Saheli, who helped turn Timbuktu into a famous city of Islamic scholarship, returned with him.

He commissioned Abu-Ishaq Ibrahim-es-Saheli to construct his royal palace and a great mosque, the Djingareyber Mosque, at Timbuktu. Still standing today, the Djingareyber Mosque consists of nine rows of square pillars and provides prayer space for 2,000 people. Es-Saheli introduced the use of burnt brick and mud as a building material to this region. The Djingareyber's mud construction established a 660-year-old tradition that still persists: each year before the torrential rains fall in the summer, Timbuktu's residents replaster the mosque's high walls and flat roof with mud. The Djingareyber Mosque immediately became the central mosque of the city, and it dominates Timbuktu to this day.

During Moussa's reign Timbuktu thrived as a commercial center and flourished into a hub of Islamic learning. Even after the Mali Empire lost control over the region in the fifteenth century, Timbuktu remained the major Islamic center of sub-Saharan Africa.

Posted by theceelist at 7:10 AM

And the pilgrimage of gold? Wish I had seen it...

Thanks for this amazing thing...

I read about Moussa last year. Cate.. I'm glad you enjoyed it..:)