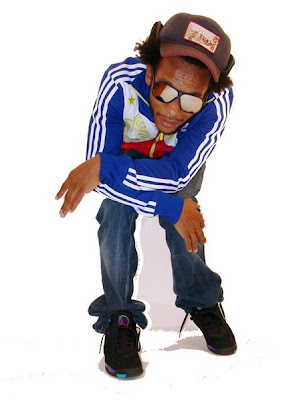 When the first bars of ”Beat Rock” drops, you know exactly where Tabi Bonney hails from - Washington, DC. A city that seems to always sit on the precipice of poverty and crime..there really hasn’t been much to sing about.

But with the emergence of Tabi Bonney that could all change.

When we asked Tabi about his perfect day, one would imagine he would talk about material things but, Tabi was very clear about what his idea of a perfect day is. He’d love to sit on a beach on a sunny day, eating brochettes, with a beautiful woman and then use that experience for more inspiration.

Born in Togo, West Africa…his early life was spent traveling between Africa, Europe and the USA. It’s not surprising that this young globe trotters favorite places in the world are the Ivory Coast and Nice, France. Both visually stimulating…Nice has the uniqueness of having both snow capped mountains and beaches in the same aerial view.

The son of a well known African musician it was almost inevitable that Tabi would follow his father into entertainment, but writing rhymes didn’t always come easy to him.

He formed a group with his friend Haziq Ali…Organized Rhyme back in high school.

They opened for the likes of Lil Jon, Cam’ron and Outkast.

He pursued a degree in biology at Florida A& M and went on to get his Masters in secondary education. He taught for two years until the music bug caught hold of him again and he chose to follow his passion.

Initially his mother, a retired school principal, and his musician father weren’t impressed with the idea of Tabi’s new found direction; however, after hearing his first radio hit, they realized that he had real talent and have been supportive ever since.

He credits the discipline that he learned through his medical studies as part of what kept him focused. He also talks about his mother being a driving force in his life’s path. He laughingly calls her the “Dopest International Ghetto Moms” in the world.

That self discipline left him in good stead when it was time to push his first album. Frustrated with the major record companies, not convinced that they understood his vision…Tabi took it upon himself to produce and market his own independent production.

"A Fly Guys" Theme was born and was subsequently released. He directed his first video,”You”, which was picked up by VH1 Soul. He became the first Indy artist to be picked up and featured in this way.

One could call Tabi more of an international artist than most. His clothing line has a Euro centric lean to it and having traveled the world with his family. Tabi has a feel to him that says more than just DC.

His love for his homeland Togo is a motivating factor in his determination to make it to the top. He told us that he would love to work to develop his homeland, which is woefully underdeveloped.

His next album “Dope meets Fresh and Fresh meets Superstar” is due out on release in 2008. The latest video off the album, "Cool and Fly," was filmed in Togo and has realized one of Tabi's dreams. I’m sure that this will be the first of many fulfilled dreams.

When pushed to define the term “SWAG”..Tabi says that for him it means being true to yourself and having other people admire and get inspiration as a result of that.

Being true to self is pivotal to Tabi’s success. Being genuine is important to him too. He cites that attribute as a quality he looks for in a friend and it’s clear that Tabi is no fake.

With Tabi you get the full package. His lyrics represent what the popular kid would have said and there’s no doubt that this cool kid's popular status will continue to rise.

The Cee List: Where do you see yourself in a year?

Tabi: On the beach in Lome,Togo...literally LOL!

Tabi: My mission is to give back to the country of Togo in West Africa. Everything is so underdeveloped there now. They need simple things such as paved roads and a sewage system.

Tabi: Sunny with a breeze about 80 degrees on the dot. Having a good intellectual convo with a pretty woman, then boning right after that. Then after that eating some brochettes right off of the grill. Then taking a dip in the beach, then writing a dope song after all of that inspiration!

Tabi: Living my dreams...creating my own world, (which I am doing ; )

The Cee List: Where was your favorite place you lived/or visited and why?

Tabi: Cote d'Ivoire, West Africa. It's like a little Paris, not sure how it looks now because of the civil war though. Next would have to be Niece, France. The city is so visually stimulating. When you arrive in a plane you see snow capped mountains and a beach in the same view!!

Tabi: My moms is the dopest international ghetto moms in the world LOL. She was in the peace corps and was a teacher and principal for a couple of schools in the US and Internationally. She is definitely the person where I get my drive from.

The Cee List: How was life growing up, aside from music?

Tabi: Life is and was great. No complaints or major tragedies. My parents are jet-setters so we were able to experience different continents and cultures since we were babies. That's why I think I have no apprehension on expressing myself and completely being myself.

The Cee List: What does family means to you?

Tabi: Someone that you can sense is genuine don't confuse that with Genuwine(I don't know him like that). haha! But seriously...a friend is someone that you can call on at any pint and they will give you their honest opinion or run to your aid if you are in need.

The Cee List: What does swag means to you?

Tabi: I kinda hate that term because everybody is overusing it. But I guess it's being yourself to the tenth power and other people admiring or getting inspiration from it.
Posted by theceelist at 11:08 AM