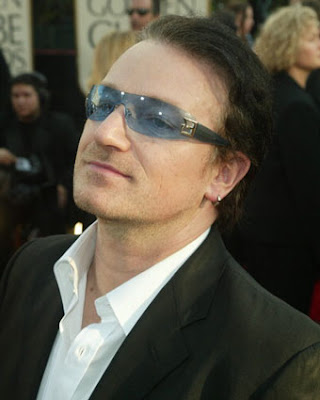 Nominated for The Nobel Peace Prize…Bono has established himself as a true “fusion philanthropist" Someone who has the ability to mesh different people and ideas.The One Campaign has been instrumental in promoting a call of action for every citizen to do something about poverty in developing countries.

Born as Paul David Hewson in Dublin, Northern Island in 1960. Bono was the 2nd born brought up as a Catholic by an Anglican mother and a Catholic father. He acquired his name as part of a childhood ritual of sorts. In school he was part of a lyrical gang who used to go on public transportation and serenade travelers with songs. Bono had the loudest voice so one day his friend called him Bono Vox which is latin for Good Voice.

In 1976 Bono answered an ad for band members and soon U2 Was born. He went on to great success with his band. He wrote most of the lyrics for the songs and it was clear from the start that U2 were conscious of the world’s tragedies.

Bono has been part of many initiatives to help poverty in Africa and stop world hunger as a whole. He was motivated to be proactive after seeing a concert organized by Amnesty International in 1979. Since that time he has been focused on shining a light on the issues that affect the developing world.

Debt, AIDS, Trade in Africa (DATA) is the charity that he founded in London. It was created to stem the debt that poor African nations incur when borrowing from the West. At this time most of DATA resources are being focused into the One Campaign, which is a grassroots project geared to motivate individuals and create a strong lobbying force in America.

Its clear that Bono has a good voice,and a good heart too.


atu2
wikipedia
Posted by theceelist at 12:30 AM