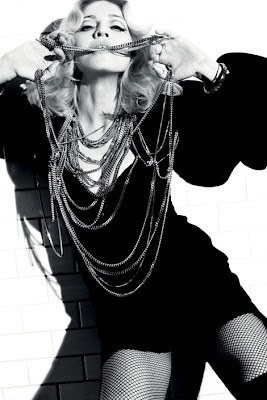 Considered the Queen of Pop. There’s no doubt in her 25 years in the spotlight that Madonna’s life has courted controversy. At other times she shuns it. Her growth and constant reinvention in front of the cameras has been at times shocking, at others uplifting. We can call her the Chameleon of Pop …it’s clear that Madonna is a force to reckon with.

Madonna is soon to reach the ripe old age of 50 but there is nothing old about Madonna at all. She says this time is her best time. She dances better and feels more focused than before.

Being a mother to three children, including an African child named David, has thrust Madonna’s life in a different kind of spotlight. She has likened the adoption process of David as being akin to childbirth. The public scrutiny and, at times lampooning, has made her new growth more satisfying than the previous incarnations.

Born in Michigan. Madonna was an A student and won a scholarship to the University of Michigan. She moved to New York on the behest of her ballet teacher with the hope of becoming a professional dancer and found herself surrounded by those people who could make it happen for her.

Her first album “Like a Virgin” dropped in 1982 and it marked the beginning of her ascent into Superstardom.

Throughout the years Madonna has gone through different changes. Using religious icons, pushing boundaries and speaking out against injustices. Madonna has definitely earned the title of the most successful female recording artist of all time.

The reinvention of Madonna from wanton hedonist to responsible mother and wife has left some rather cynical as to the sincerity of Madonna’s actions. Has she simply gone through another change in order to generate and support her career…again?

With the adoption of Malawian David…it’s hard to see Madonna as the hard edged business woman that she was known to be. Rather you can see her softer side. It takes a lot to adopt a child from an African nation…particularly one where the laws were not even in place to support the action…but Madonna has proven that with true determination anything can be achieved.

Her study of the Jewish Mystical belief of Kabala is a far cry from the times where even the Pope spoke against her. It’s hard to see any one artist that has had such an effect on pop culture in the last 25 years in the way that Madonna has. She’s moved with the times, and at the end of the day, that is the very quality that will ensure that we will be noticing Madonna for many years to come.