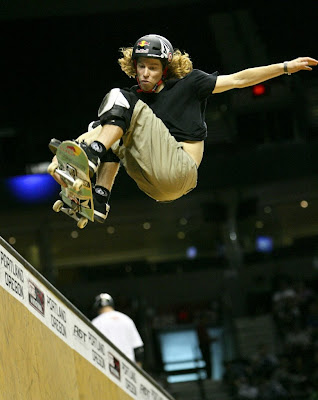 Winning the gold medal on the half pipe at the 2006 Olympics in Turin wasn’t a child hood dream for the boy wonder Shaun White. But it was the most exciting moment of his life. Easily the most recognized face in action sports.

Shaun snowboarder/skateboarder was born to Roger and Kathy White on September 3rd 1986. For a baby born with a heart defect who endured two heart surgeries before the age of 1 to be able to reach the levels of athleticism that he has, almost defies belief.

Following his older brother, Jessie, Shaun first learned to ride the slopes at the tender age of six. At seven he won his first wild card contest on the snow board. At the age of nine he befriended Tony Hawk in a skate park and the skateboarder became a mentor to him. By the age of 13 his skills, talent and clear fearlessness on the slope was noticed and he turned Pro. He went on to win his first major competition in 2001. He went on to win numerous competitions becoming the first athlete to compete and win medals in both the summer and Winter Olympics in 2001.

Known as "The Flying Tomato" due to his flaming red hair..Shaun is well liked due to his down to earth personality and obvious love for the sport. His sense of humor was displayed well when he was interviewed on CNN and began talking about the extra luxuries that were afforded him on the return plane trip from Turin after his win. When teased by the CNN anchor about having free drinks when underage…he quipped, “Mountain Dew..Baby! A great example of Shaun’s love of life and quick humor. He even had a hand in the design of a video game, Cool Boarders 4.

Not to be constrained by his sport, Shaun delved into the world of music by releasing an album, "The White Album”, creating a clothing line and releasing DVDs. Rolling Stone called him the coolest kid in America at 22 years old, and he is known throughout the circuit as a genuinely nice guy. There is no limit to the heights that this child prodigy can reach.