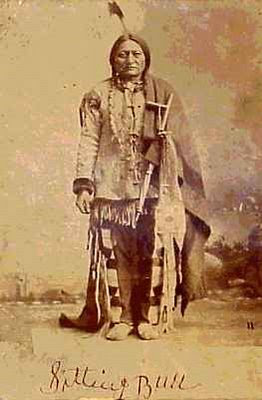 The Battle of Little Big Horn is perhaps one of the best known battles between the Sioux Indians and the settlers. General Custer marched with his troops onto the black hills to face the Lakota Indians who were tired of the settlers stealing and encroaching on their sacred lands. This battle was forever known as Custer’s Last Stand.

The settlers were defeated by a fearless warrior known as Tatanka-Iyotanka whom we know as Sitting Bull. Tatanka-Iyotanka is probably the best known of the Lakota Indians to this day. Born into the warrior Sioux nation, Sitting Bull was destined to fight for his people. His first kill was of a Buffalo at the tender of age 10. By the age of 14 he achieved his first battle kill and received his white warrior feather.

The life of the Native American may have seemed harsh to others, but it was the life that had been lived for generations. Respect of the earth and its resources coupled with mysticism for the Creator.

Sitting Bull was very active in fighting for the rights of his people. As the frontier was pushed farther into Lakotan territory, so did the frustration of the people increase. Treaties were broken and skirmishes fought, which culminated with the Battle of Little Big Horn. Once gold was discovered in the Black Hills there was no doubt that the smaller conflicts that had came before was not going to be easily settled as before.

Although similar in war record, Custer and Sitting Bull stood for different things, where as Custer stood for the US government and its desire to encroach on Indian land at will. Sitting Bull stood for the right of his people to exist on the Great Plains as sovereign free people. After the defeat of General Custer and his men, the US Army relentlessly pursued the Plains nations. In 1877 Sitting Bull lead his tribe to Canada, where he lived for four years. He refused an offer to live on a reservation, in exchange for a pardon, but was forced to surrender to the US army after realizing that there wasn’t going to be enough buffalo to feed his people.

Almost like a latter day Prophet, Sitting Bull led his people back to the US where he was confined to Fort Randall (In violation of the previous surrender agreement). He was later allowed to return to his reservation only leaving in order to perform in Buffalo Bills, Wild West Show. He made $50 a week performing but gave his money away to those in need. He only stayed with the show for four months. After which he returned back to the reservation.

The ghost dance movement marked the end for him. Anything that could be seen as a tool that could be used against the authority of the settlers was considered a threat. The ghost dance movement was simple. It was a dance that was supposed to hold special power in that it would work to free the Lakotan people and bury the settlers. The US government was suspicious of anything that was seen to help the Indian cause and particularly Sitting Bull's interest in this movement was profoundly disturbing to those people in authority. He still carried great weight with the people and the US government was more than likely afraid that he would incite his people to rise up against the status quo.

Some say it was an assassination carried out by Indian accomplices. Others say a tragedy. Regardless, on December 5th 1890, Sitting Bull’s life was cut short. Some call Sitting Bull an obstructionist which is true in so far as he was against allowing the US government to take the land of the Indian. But I believe that Sitting Bull was a fighter for the rights of his people much in the same vein as other civil rights activists. The difference is that his people were indigenous to this land. -- Dick Shovel
-- Lakota

Wow :) Thank you ladies for the education...I think that's what I LOVE about your blog MOST...it's very insightful, intelligent and you'll always learn something new and interesting...thank you again :)