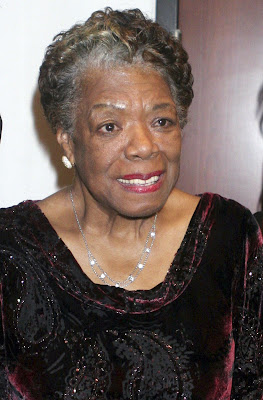 "Three years before this writer was born in 1973, a book was published by another more superior writer than I. The title of the book was simple, yet so great in meaning," I Know Why The Caged Bird Sings.” I read this book as a young girl and greedily devoured each and every word within. When I put the book down, I too knew why the caged bird sung."An autobiography is often the telling of someone’s life in their sunset years.

Looking back, Maya Angelou’s telling of her life opened our eyes to the possibilities. Penned through her childlike eyes and contining through for others, we have come to know and love Maya for her strength and courage. The epitome of a strong woman of color, Miss Angelou shows us how we too, can prevail over bad times.

There is, however, much more to Maya than her autobiographies.Raised in the deep south , shunted by relatives and being raped at the age of 8. We know all too well the harm she suffered as a child. As a result, her rapist was beat to death three days after leaving jail. Maya chose to never utter a word. She said if her words were so powerful to cause another human's death, then she would never speak again.The mercy that she had towards her rapist is awe inspiring. To have been so young and still have an understanding that life has value, even if it belongs to a man that violated her so horrifically.

Maya's life is as colorful as any fiction novel. Working as an actress and briefly as a prostitute, Maya’s life is a history lesson of the black woman’s experience in the early years of the civil rights movement.The first woman and only the second poet in US history to write and recite for a Presidential Inauguration..Maya has been making up ever since for her earlier silence.

In 1959 she was asked by Dr. Martin Luther King to be the northern coordinator for his Christian coalition. From 1961-1962 she was the associate editor in Cairo for the "Arab Observer" (The only English language newspaper in the Middle East at that time.)She went on to edit a paper in Ghana in 1964-1966.Maya was the first black woman director in Hollywood with “Georgia, Georgia” for which she also wrote the screenplay and musical score

Maya has done so much in her life that it’s almost mind numbing, yet she manages to remain humble. She travels by bus when she lectures, because she finds the glare of celebrity life to be tiring. I am sure we can all agree that it is indeed a blessing that Ms. Angelou found her voice.
Maya Angelo is a woman who exudes positiveness, not only through action, but through her words.
-- poets
-- empirezine

I Know Why the Caged Bird Sings is also one of the most influential books of my life. It taught me the power and strength of my own voice and the voices of all the caged birds of the world. Maya is one of the greatest voices of all time. Especially for little brown girls of the American struggle.