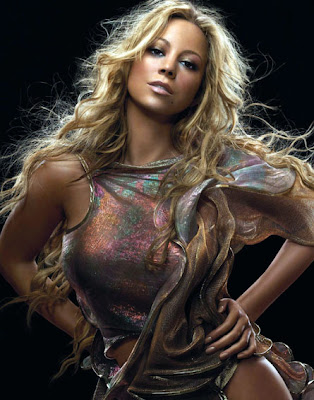 Born on Long Island in 1970…Mariah was born the daughter of an Irish Opera singer and Afro-Venezuelan engineer. The youngest of three children …Mariah’s voice made her stand out her from older siblings. Her mother recognized the gift of Mariah’s voice at the age of 3 when Mariah mimicked her singing a Verdi opera.

Her parents divorced at the age of three….and her mother subsequently worked many jobs to support the young Carey children. It’s well documented that Mariah and her father had an acrimonious relationship after that point.

Her classmates gave her the nick name of Mirage due to her absences from school due to her work as a demo singer for local recording studios.

She did manage to graduate from her high school and landed the position as a backup singer for Brenda K Starr.

The rest is history.

Mariah’s demo tape was handed to Tommy Mottola…The head executive at Columbia Records. After hearing her voice…Mariah was immediately signed.

Mariah’s success in the 90’s was manufactured in part by her husband who helped guide her early career.

Her use of the highest soprano register, the whistle level, was at times disputed as manufactured in the studio. Her MTV unplugged quieted the doubters for good.

Her rise to success in the 90s’ was a façade for the inner struggle that Mariah was going through. Her marriage to Tommy Mottola ended in 1997. Her first movie, "Glitter," bombed at the box office and the voices again began to question Mariah’s lyrical style. Her sometimes tepid song choices didn’t help.

Mariah’s behavior began to become more and more erratic which culminated with an appearance on MTV’s "TRL" where Mariah handed out popsicles. Shortly after that performance, Mariah was admitted to the hospital, and it was reported that she was suffering from nervous exhaustion.

Mariah has worked for the Urban Child organization since the beginning of her career. She talks about an experience in a residential summer camp for underprivileged kids as a catalyst. She wanted to help ensure that other disadvantaged children had a better experience than her own. She raised $700,000 for the Fresh Air Fund. Her work and effort resulted in a camp being named after her.

Mariah received a congressional award in 1999 for her contributions to youth charities. She was recognized for her work with the Fresh Air Fund and The Administration for Children and Families in NY.

The Fresh Air Fund is a charity geared at providing disadvantaged inner city children with the opportunity to experience a new, and healthier environment for a few days in the Summer.

She also works with the Make A Wish Foundation..A charity that focuses on making wishes come true for sick children. Mariah has donated over $100,000 to fund over 20 children’s dreams.

Mariah has a voice that can lift hearts and clearly the good spirit to do the same for children.

The new Mrs Cannon has solidified her position has modern day Diva.