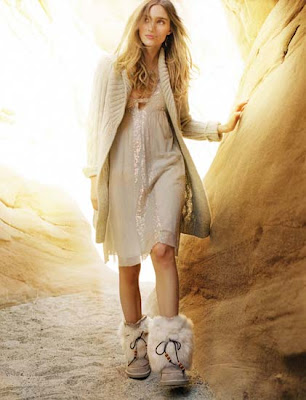 The Australian ugg boot traces its origins back to at least early last century when World War I pilots were pictured wearing their fleece-lined "Fug Boots" (Presumably flying ugg boots!). Blue Mountain Uggs go back to 1933 with shearers finding them cosy and warm and in the late 1950's, Mortel's Sheepskin Factory began producing a line of "apache ugh boots". Then in the late 1960's Australian surfers decided it was real cosy to jump out of the surf and into a pair of sheepskin boots to help get warm. Their original ugg boot style was very basic - essentially two pieces of sheepskin in the shape of a boot joined together down the centre-front and back with a soft sole attached to the bottom. Yes - they didn't even have hard soles. In fact, they were really only a glorified sock.

The late '60's saw uggs on Bells Beach in Victoria and perhaps the biggest manufacturer at the time was in South Australia. Further manufacturing was occurring in Western Australia from Albany right up to Perth.

The general consensus is that the name is coined from the term "ugly boot" and ever since then, Australians have referred to their sheepskin boots as ugg boots, uggies or uggs. Regardless of the history, it is and always will be a generic term for sheepskin boots in Australia. Ask any Australian what an ugg boot is and they'll say sheepskin boot. It's as 'ocker' (slang for 'Australian') as meat pies and kangaroos. Contrary to some stories proliferating on the web, it would be difficult for any one person to lay claim to making the "first" pair of uggs or ugg boots and it was quite likely invented over and over by different people given they do look - well - sort of "ugly".

The people behind UGGS-N-RUGS™ saw the potential for ugg boots and registered and set up their business in Western Australia in the 1970's. But they decided to take the 'ugliness' out of the centre-front seam style and began producing what they called a three-piece style with patterned braid down the back, a decent sole and in more recent years, a fully moulded stitched-in heel counter. With the moulded heel counter there is sheepskin, the heel counter and then some suede leather over the top creating three layers. And the counter itself is stitched into the inner sole meaning it can not 'slide' around. This provides maximum support and helps the boot with retention of shape - something most manufacturers have never been able to achieve. This style was to provide the core of their product offerings. Ironically, since then, versions of this style have been duplicated and copied far and wide by various competitors.

UGGS-N-RUGS lay claim to being one of the longest surviving Australian sheepskin footwear manufacturers. There are only a couple of other long-term manufacturers in the same league.

Over time, many manufacturers and retailers of sheepskin boots have cropped up. One Australian fellow - Brian Smith - took some sheepskin ugg boots from Australia to the US and began selling them. Variations of his story can be found all over the web but there were many others who also sold ugg boots throughout the world even before him. Eventually, in the mid-1990's, a big US footwear company Deckers Outdoor Corporation, bought into the ugg boot scene. Sadly, Deckers have laid claim to the term "ugg" despite its generic-ness and public domain use (and its entry into many aussie slang dictionaries) and despite other Australian manufacturers also selling them into the US as an 'ugg boot' from as far back as their origins can be traced. We have been informed by a representative of Ugg Australia (12 Dec 2003) that no footwear is made in Australia anymore. A portion is made in New Zealand with the rest being made in China. This is despite much of the product being labelled 'Original UGG Australia'. Ironically, no 'bricks and mortar' retailer in Australia sells the US Ugg Australia brand. Why? Who really knows... maybe because they are simply too expensive when compared to the local - more genuine - product.

The ugg boot story is now a classic David and Goliath battle. The smaller, original, Australian long-term manufacturers are being pushed around (and literally just that - receiving 'cease and desist letters' and 'legal threats') by Ugg Holdings (yes - the American company) who on the one hand claim they sell an original Australian ugg boot yet the majority, if not all (their representative now (18 Dec 2003) can't decide whether some are still made here in Australia or not) are made outside of Australia (in fact - many in China).

Guys, Uggs make me feel warm & cozy...lol...so...be sure to check out my brother in-laws...
www.igotuggs.com Its in my fav up on the right;)

Posted by theceelist at 9:23 AM