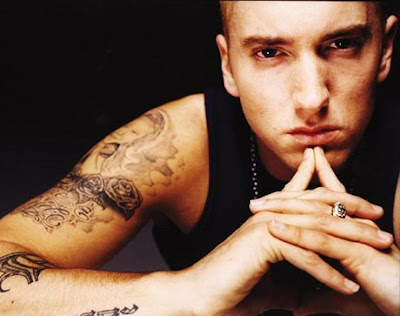 Eminem was born 'Marshall Bruce Mathers III' on the 17th October 1973 in Kansas City, Missouri, USA. Later he would be moved across various states before ending up in Detroit at the age of 12. Eminem took up rapping whilst in high school and was heavily influenced by his uncle Ronnie who later commited suicide.

Eminem decided to take raping serious and dropped out of high school in the ninth grade. Now focusing on rapping Eminem started showing up at rap freestyling events at Detroit's St. Andrew's Hall and went on to release his first LP "Infinite" in 1996. "Infinite" got a poor crticism by many saying he was trying to be a rapper which he wasn't but as Eminem quoted about his LP, "Infinite was me trying to figure out how I wanted my rap style to be, how I wanted to sound on the mic and present myself. It was a growing stage. I felt like Infinite was like a demo that just got pressed up." In 1997 Eminem competed in the LA Rap Olympics and took second place in free style rap which soon gave him more recognition. Later that year he featured in the single "5 Star Generals" by Shabaam Sahdeeq which helped him gain a much larger underground audience.

Things started to pick up for Eminem in 1998 when he was heard by Dr. Dre on a LS radio station and was soon signed up to the Aftermath Label. Eminem said "It was an honor to hear the words out of Dre's mouth that he liked my shit. Growing up, I was one of the biggest fans of N.W.A, from putting on the sunglasses and looking in the mirror and lip sinking, to wanting to be Dr. Dre, to be Ice Cube. This is the biggest hip-hop producer ever."

He now knew that the game had stepped up a level and shortly after signing with Dre he released "The Slim Shady EP" which would be the real starting point of his world wide recognition today. After "The Slim Shady EP" went down well, in February 1999 he released "The Slim Shady LP" which debuts at No.2 on the Billboard charts, selling 283,000 copies. Within 2 month's "The Slim Shady LP" went 2x Platinum and topped the Billboard R&B Album chart for a week. At the end of the year the LP went 3x Platinum and Eminem won his first awards - MTV Music Award for Best New Artist and the MTV European Music Award for Best Hip-Hop Artist. Now with his new found fame the crow's came out when Eminem's mother sued him for $10 Million based on negative accusations made about her and his childhood throughout his LP, this wouldn't be the last time Eminem ends up in court againsts his mother!

The start of 2000 showed just how well Eminem was doing when he was nominated for 2 Brit Awards, won 2 Grammy Awards for Best Rap Solo Performance and Best Rap Album and won another 4 awards - The Online Hip-Hop Award for Best Artist Web Site, Best New Artist, Hottest Music Video and a Detroit Music Award for Outstanding National Album. He would now release his next LP "The Marshall Mathers LP" which flew off the shelves selling over 1.7 Million copies in the first week making a new record for a solo artist. The album didn't come without it's conflicts and controversies, the album created a feud with pop princess Christina Aguilera (the single "The Real Slim Shady" alleged that she had performed oral sex on both Limp Bizkit's Fred Durst and MTV's Carson Daly).

His mother filed a defamation lawsuit against him for $1 Million which would end up being dismissed and accusations of homophobia and sexism mostly centering around the songs "Kill You" and "Kim" would be an ongoing battle over Eminem's lyrics even today!. Within a month "The Marshall Mathers LP" went 5x Platinum and topped the Pop LP charts for 8 weeks, the R&B LP charts for 4 weeks and the Internet Album charts for 2 weeks. At the end of the year "The Marshall Mathers LP" went 7x Platinum and was recognised as the 2nd biggest selling LP in the U.S. with sales of over 7.9 million copies. In 2001 "The Marshall Mathers LP" went 8x Platinum and Eminem released his next LP, "The Eminem Show" which sold over 1.3 Million copies in the first week and went 4x Platinum within 2 month's By the end of the year "The Eminem Show" was the top selling LP of the year with over 7.6 million sales. He would now go into the movies and started filming "8 Mile" which pulled in $54 Million in the first weekend after it's relase in October. Eminem would then go on to release a further 2 LP's, "Encore" and "Curtain Call" and would be presented with tons of awards for his music.

His life has been an interesting battle of struggles and successes, from the hood to the top Eminem has always followed himself and done what he wanted. Today he has won more awards than can fit into a mansion and has had huge success in both his music and film releases. He has taken a step back from his own music today and is concentrating more on developing other artists with his own record label "Shady Records".

After his 2004 album, Encore, Eminem went on a self-imposed hiatus, popping up in gossip columns reporting his imminent demise, his slide into obeisty, and his supposed retirement from hip-hop. In October 2008, however, Eminem put the retirement reports to bed: he announced on his Sirius Satellite Radio channel, Shade 45, that he was working on a new album, titled Relapse, and promised it would be out in 2009. Eminem celebrated the announcement by releasing a freestyle, "I'm Having A Relapse.

prefixmag
Posted by theceelist at 8:00 AM

What is your favorite song of his?