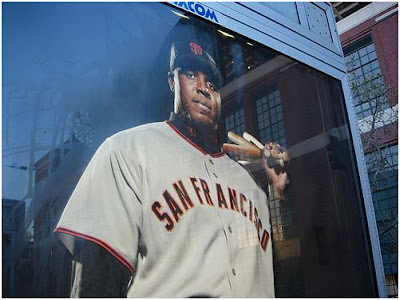 Until recently, the best left fielder to ever grace Major League Baseball was Ted Williams - one of the best hitters of all time. But not even the great Ted Williams is as good an overall player as the San Francisco Giants' left fielder Barry Bonds. Bonds has won baseball's MVP award three times, and finished 2nd only to the Atlanta Braves' Terry Pendleton in yet another year. What makes Barry Bonds such a special baseball player? It's simple - he beats you in every aspect of the game. Let's break it down.

HITTING - Bonds is a lifetime .300 hitter, which is certainly a good average. Left fielders Ted Williams and Stan Musial had higher lifetime averages, but there's more to the story. First of all, Bonds rarely gets a pitch to hit. Bonds has typically been on teams without much support around him, meaning that teams are willing to pitch around him to take their chances with other batters. The result is that Bonds gets fewer good pitches to hit. Neverthless, Bonds has managed to hit 490 Home Runs as of September 2000, and should hit the 500 milestone by the end of the year. By the time Bonds retires, he will probably trail only Hank Aaron and his godfather, Wilie Mays, in career home runs. Bonds has one of the quickest bats in the big leagues, and he has used it to accumulate some of the greatest hitting statistics of all time.

BASERUNNING - Here is where Bonds truly enters a league of his own. Bonds is only 30 stolen bases away from reaching 500 for his career. He already is the only baseball player in the history of the game to accumulate 400 Home Runs and 400 steals, and it seems certain he will reach the 500/500 milestone. No one can even come close to those numbers. Bonds is a great runner, and it adds just another dangerous dimension to his already lethal game.

FIELDING - Bonds, while sometimes overconfident on the field, is undeniably a phenomenal fielder, and he has been rewarded for his great fielding with 8 Golden Glove awards. His arm and his range are excellent, and he frequently steals hits and extra bases away from opposing teams.

As you can see, Bonds is the complete package. He can do it all - hit, run and field. But lastly, let's look at a measurement of how valuable Bonds is to his team. To measure the value of a player to his team, baseball statisticians typically look at a players "OPS" statistic. OPS is a player's On Base Percentage + Slugging Percentage. For his career, Bonds has averaged nearly 1000 OPS. Those are numbers only hitters like Ted Williams and Babe Ruth can talk about. But as we mentioned earlier, Bonds adds more than hitting to his game. He's the complete player - the hitter, the fielder, and the runner. And his complete package is what makes him the best left fielder to ever play the game of baseball.

I saw Bonds play once away from home...

The crowd was screaming at him... it felt like being in the Roman Colisium.

He was so cool on the outside... like a gladiator...