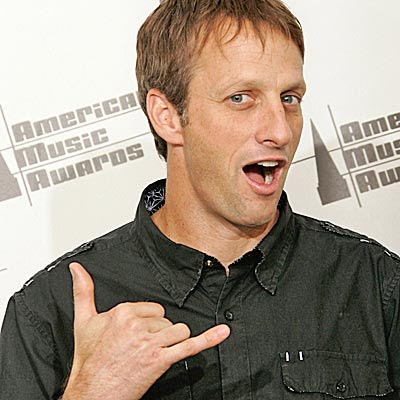 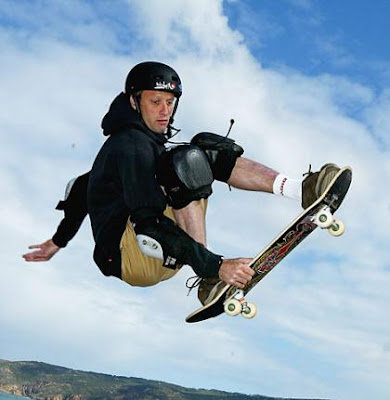 Professional skateboarder. Born on May 12, 1968, in San Diego, California. As a kid, Hawk was intelligent, high-strung, and hyperactive-combination his mother once described as "challenging." When he was nine, he received a skateboard from his older brother. That gift

changed his life and gave him an outlet for all of his energy.

It didn't take long for Hawk to excel at skateboarding. By the age of 12, he got his first sponsor, Dogtown skateboards. Two years later, he became a professional skateboarder. Hawk was considered one of the top skateboarders in the world by the time he was 16 years old. In his 17-year professional career, he won more than 70 skateboarding contests, including gold medals at the 1995 and 1997 X Games.

However, all of his talent and success could not prevent Hawk from experiencing some rough times in the early 1990s. At this time, the popularity of skateboarding was waning as were his earnings. He had already spent much of his earlier winnings and almost went bankrupt. He started a skateboarding company, BirdHouse, with Per Welinder, another pro skateboarder. Their company struggled until the rise of extreme sports generated new interest in skateboarding. Hawk competed in the first Extreme Games—later simply called X Games—in 1995. He received a lot of media attention, becoming the best-known skateboarder in the world.

His ability to perform impressive stunts has helped fuel Hawk's popularity. He has created amazing tricks, including the "900." This trick calls for the skater rotate 900 degrees-about two and a half turns-in mid-air. Hawk was the first to successfully complete this move in competition at the 1999 X Games. After this personal victory, he retired from competition. He still rides, gives skateboarding demonstrations, and devises new tricks-often at the custom-built ramp at his company's warehouse. Besides his skateboarding business, he has a successful line of video games, skateboarding videos, and extreme sports tour called Tony Hawk's Boom Boom HuckJam, which he started in 2002.

In addition to running his various business ventures, Hawk has worked to help young people by creating more public skateboard parks. Through the Tony Hawk Foundation, he has provided grants and technical assistance for new parks, especially in low-income areas. The foundation holds special events as well.

Hawk also takes pride in his role as a father to three boys. His oldest son, Riley, is from his first marriage to Cindy Dunbar, which lasted from 1990 to 1994. Spencer and Keegan are his sons from his second marriage to Erin Lee. The two married in 2001 and later divorced in 2004. Hawk married Lhotse Merriam in January of 2006.

What a great name... Tony HAWK

Thanks friend for the Hawklift!