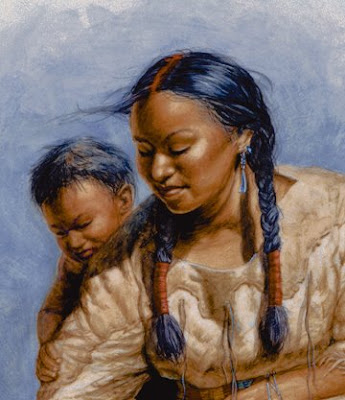 Sacagawea (also referred to as Sacajawea, Sakakawea, Sacajawea, and Bird Woman) was a Shoshone Native American girl who is most known for helping Meriwether Lewis and William Clark, along with the Corps of Discovery, with the Lewis and Clark Expedition across the United States. Although a lot has been written about her, there is a lot of conflicting and legendary information that has been recorded, including Sacagawea's birthdate, her death date and even the spelling and pronounciation of her name. Sacagawea was believed to have been born in 1787, however, some sources said that she was born in 1786, 1788, or 1790. She was part of the Shoshone tribe and was born in the area of what is now known as Three Forks, Montana.

Sacagawea was kidnapped in 1800, which would have made her about 13 years old, by the Hidatsa tribe, and some sourses believe, was kept as a slave. Other sources say that she became part of the tribe. Sacagawea was either purchased by, or won through gambling (depending on the source), a French-Canadian fur trader named Toussaint Charbonneau, and became his wife. Sources differ on when this took place; some say that Sacagawea was 16 at the time, other sources say that she was 15 or 14. It should be noted that Toussaint Charbonneau was already married to another Shoshone woman at the time he married Sacagawea.

During the winter of 1804 and 1805, Meriwether Lewis and William Clark, and the Corps of Discovery arrived. They were looking for a translator to translate the Hidatsa language for help with trading and when they talked to Charbonneau, they discovered that his wife Sacagawea also spoke Shoshone, they hired Charbonneau as interpreter, with Sacagawea as an accompanying unpaid interpreter, with their expedition from the Northern Great Plains to the Pacific Ocean. Sacagawea was pregnant at the time. On February 11, 1805, Sacagawea gave birth to her son, Jean Baptiste Charbonneau while they were staying with the Corps of Discovery at Fort Mandan. When other Native American Tribes would see the group, they assumed that the Corps of Discovery was friendly, since there usually wasn't a war party with a mother and her baby. According to many sources, William Clark nicknamed him Pomp, or Pompy, or Pompey. However, some sources, including a few Native American sources say that he was named Pomp by Sacagawea, which meant first born.

Sacagawea helped the Corps of Discovery with local navigation, horse trading, translating, keeping peace with other tribes, finding edible food, and was the one who rescued Clark's journals, along with other valuable items, from the Missouri river when Charbonneau capsized their boat. Sacagawea made the entire trip with her child. She later had a daughter named Lisette. In December of 1812, she died of diphtheria. which at the time was known as putrid fever. However, many Native American resources state that she died on a reservation in Wyoming on April 9, 1884. According to the U.S. Mint, more statues, streams, lakes, landmarks, parks, songs, ballads, and poems honor Sacagawea than any other woman in American history.

Posted by theceelist at 7:28 AM

Thanks for sharing her with us...