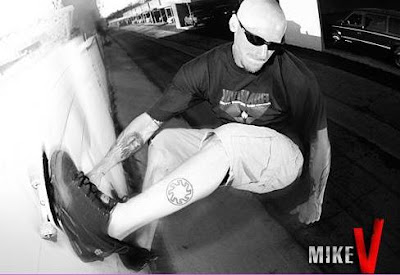 Vallely, or 'Mike V' as he's known to some, started skateboarding as a 14-year-old in 1984. Only two years later, Powell Peralta started sponsoring Vallely, and his career took off. In the summer of 1986, he became the NSA National Amateur Streetstyle Champion and appeared on the cover of Thrasher Magazine.

Vallely turned professional in 1987, and the next year Powell Peralta released his first pro model board. In 1989, Vallely helped form World Industries Skateboards, which revolutionized the skateboard industry.

As skateboarding hit mainstream in the 1990s, Vallely was with it every step, competing in the inaugural X-Games in 1995 and traveling to China in 1997 to do the first-ever professional skateboard demonstrations in that country. Etnies Footwear released Vallely's first signature skateboard shoe in 1998.

Vallely's been a staple on Tony Hawk's tours and video games for years.

This dude is cool...

I skateboarded when I was little... I remember going down an enormous hill once... flying... almost out of control... what a intensely nice feeling...