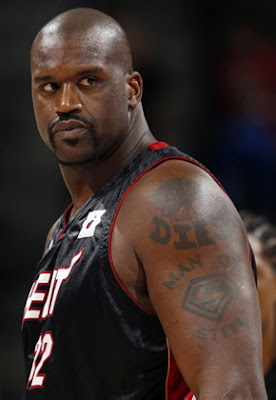 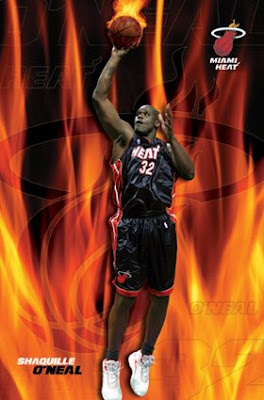 Shaquille Rashaun, Arabic for Little Warrior, was the name given to Lucille O'Neal's son by his biological father. Better known by his nickname "Shaq," Shaquille O'Neal was born in Newark, New Jersey, on March 6, 1972. His stepfather, a military man, was stationed in Germany, where O'Neal first learned to play basketball. After settling in San Antonio, Texas, his mother used to have to carry his birth certificate to prove how young he was due to his unnatural height for his age. When he was 13 years old he was already 6'6", and basketball scouts took an early notice of his abilities. He honed his skills in high school, reaching national recognition before attending Louisiana State University, where he was named collegiate player of the year in 1991.

No longer a Little Warrior, Shaq, the now 7'1", 325 pound center was chosen by the Orlando Magic in the first round of the 1992 NBA draft where, along with teammate and fellow star Anfernee "Penny" Hardaway, he would lead his team to the NBA playoffs. Shaq's star status landed him a role in the 1994 basketball film "Blue Chips," starring Nick Nolte; and he also released a rap CD that was critically trashed. In 1995 the Magic would reach the NBA finals, only to be swept by the Hakeem Olajuwon-led Houston Rockets; and O'Neal would once again delve into acting. This time, he played a genie in the kids' film "Kazaam." Continuing his kid-friendly acting career, he would also star in the superhero film "Steel." Both films are currently ranked in the IMDb's "Bottom 100," a list of some of Hollywood's worst films.

After unsuccessful attempts at rapping and acting, Shaq focused on what he does best--playing basketball. After the 1995-96 season, the free agent center signed with the Los Angeles Lakers, and along with teammate Kobe Bryant the two led the team to three consecutive NBA titles under coach Phil Jackson. Things weren't always pretty though, as O'Neal was constantly feuding with Bryant through comments to the press and bouts of one-upsmanship. After the 2003-04 season, he demanded a trade from the team following a loss to the Detroit Pistons in the NBA finals. Subsequently, he was traded to the Miami Heat, who he led to the playoffs in 2005 along with Eddie Jones, Dwayne Wade, and Alonzo Mourning.

O'Neal's career highlights include a trip to the All-Star game every season he has played except for 1999, which was shortened due to a lockout. He was named Rookie of the Year in 1993, was the league's MVP for the 1999-2000 season, and was named Most Valuable Player of the NBA finals three times. He is noted for his size and defensive playing ability, as well as his futility at the free throw line, with a career average of 53.2% free throws made. Shaq also played on the 1996 "Dream Team," winning gold at the Olympic summer games in Atlanta.

Shaq is known as the "gentle giant" because of his calm demeanor and notoriety for being laid back. However, his lightheartedness has landed him in trouble at times because of some of the comments he has made to the press. In 2003 he was involved in a racial controversy for poking fun at rival NBA star Yao Ming. Advocacy groups demanded apologies, and he one-upped them by appearing with Yao in a telethon benefiting victims of the recent SARS epidemic.

Currently, Shaq lives in Florida with wife Shaunie and their three children; and he has another child from a previous marriage. Ironically, after receiving his trade to Miami and moving away from Los Angeles, he announced his interest to keep acting and making rap albums.

Shaq indeed is one skilled & inspiring player. So sad, that he & Shaunie didn't work out as it would have seemed.