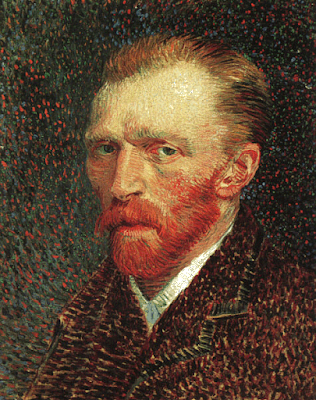 If the question was asked in the style of Jeopardy, “He cut off part of his ear”. The immediate answer would be who is Vincent Van Gogh? It is probably the best known fact about him, however Van Gogh is more than an answer on a game show. He was one of the most talented post impressionist painters that ever lived. Born to religious parents in the Netherland, in 1853,Vincent was given the name of a brother that was still born a year earlier. In a way morbid but very normal in Dutch culture at that time. Vincent had a very average childhood that was in his own words very mundane. He struggled to find a direction. He wanted to emulate his father by entering into a religious profession, but he wasn’t able to complete any of his studies to reach that goal.

His first connection with the art world began at the age of 15. He worked for a French art gallery as a Dealer. He became disenfranchised with the position, mainly because he didn’t enjoy dealing with Art as a commodity. Vincent had an erratic work career, constantly bouncing between careers, countries and home in Belgium. Perhaps his inability to stay maintain a job and relationships, was a tell tale sign of the mental illness that was to creep upon him as he matured.

At the age of 27, he was encouraged to draw, having always had a talent for art and so he began concentrating on that. His family was well connected in both the art world and religion and so his cousin helped him in his initial studies. That relationship ended when it was discovered that Vincent was in a relationship with a prostitute by the name of Sien. Vincent left Sien, unable to handle the pressure of the relationship and went on to Paris where he studied more and began painting in earnest. Before Paris, his initial creations were dark in color scheme. After seeing what artists were doing in Paris , he adjusted his style to what we are familiar with today as what is unmistakably Van Gogh. He began to use more color and used some elements from a style known as pontalistic. In Paris he befriended other artists such as Claude Monet and Paul Gauguin. He moved to Arles hoping that his fellow artists would join him in order that he could create a school of art. Gauguin joined him too and it was there that Vincent began painting what would become a signature for him…Sunflowers.

Towards the end of 1888, it was apparent that Vincent was suffering from some sort of mental illness. In one of his manias, he stalked Gauguin with a knife and cut a piece of his own ear in the rage. That was the beginning of the end. He was hospitalized and returned to Arles only to find that Gauguin had left. It was difficult for him to maintain his sanity after this point but he was still able to create in the moments of calm. Those paintings that he created in that time seem to be a cry to the world to see the turmoil that was ravaging his mind. At the end of 1890 Vincent shot himself believing that his art was a failure. He died two days later from the wound.

It is often the case that the best artists are only recognized after their deaths and this is the case with Vincent Van Gogh. A failure in life but in death his paintings have sold for tremendous amounts. To be an owner of a Van Gogh is a sign of true wealth.