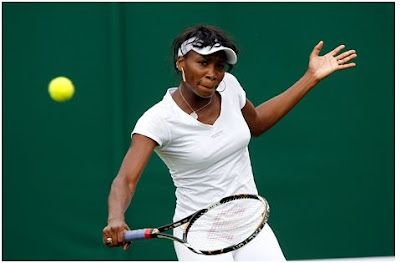 If breaking ceilings was a job requirement,Venus Williams would be the CEO. Born in the Watts area of Los Angeles, all of the Williams sisters played tennis but only 2 stood out as natural talents. Serena and Venus Williams.

Venus learned to play on the public tennis courts in Compton. Her father coached her in amateur matches. As word began spreading that there was a child prodigy in the making,Venus’s father reached out to Rick Macci and asked him to come and watch Venus play. When Rick went to see Venus,he says that he was unimpressed, until he saw her walking on her hands and then doing back somersaults on her way to the bathroom. He knew he had a star on his hands. The family moved to Florida so that Venus could train and be close to the sports academy that Macci Ran.

By the age of 14, Venus had turned professional. Luckily for her, she has a close knit family who worked hard to protect her from the pitfalls of competitive life. But that also worked against her, as she didn’t have the competitive edge that most other players (on the circuit had.) To counteract that her father used to root for the other player when Venus played. Her father has been seen as a controversial figure, the media even dubbed him as a Svengali figure because of the close way that he directed Venus, but in reality he was a concerned father. He didn’t want her to suffer the burn out that other players had at an early age.

By 1998 Venus was proving herself a formidable opponent and started to win her tournaments. Playing the best in the world –including at times her own sister Serene, Venus slowly moved up the rankings to achieve number one status. One by one the Grand slam tournaments fell at her feet. She won her fifth Wimbledon Grand slam title in July 2008, adding her seventh Grand Slam victory in total. She was able to walk away with nearly two- million in prize money from her singles win and her doubles win (with Serena). The same amount as the men’s title winnings. This was only achieved after years of campaigning by other players, because of an Op-ed that Venus wrote the evening before the Wimbledon finals in 2006. In it she calls for the All England club to ensure that woman are paid the same as men (which they had not been doing.) The British Prime Minister added his voice and within months the All England club changed the rules to allow for the female winners to win as much as the men.

Not so much as breaking ceilings, Miss. Williams totally removes them!

Posted by theceelist at 6:55 AM